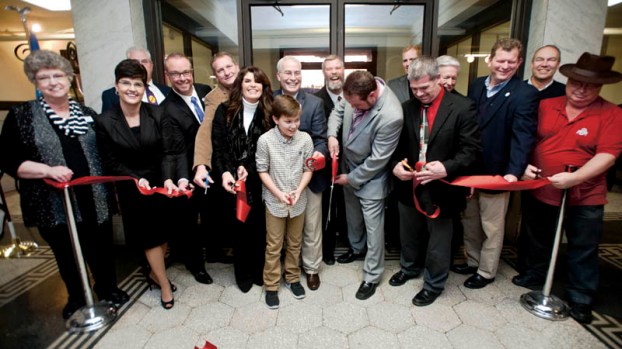 Lawrence County wrapped up the year’s bicentennial events with a birthday party at the county courthouse, marking its 200th birthday.

A large crowd packed into the building’s main lobby for the event, organized by the county’s bicentennial committee as a grand finale to the celebrations.

The event kicked off with the presentation of colors and the pledge of allegiance from Dave Lucas and Boy Scout Troop 105.

Following this, a number of Republican officials, including County Recorter Sharon Gossett Hager, Sheriff Jeff Lawless, Commissioner Bill Pratt, Engineer Patrick Leighty, Coroner Kurt Hoffman and Prosecutor Brigham Anderson, who had just won re-election in November, opted to be sworn in for their new terms of office before the gathering.

Then, local and county officials from both sides of the aisle joined in for the ceremonial ribbon cutting, followed by a performance from the St. Joseph High School Choir.

“I think this was a wonderful event,” Dyer said, noting the activities through out the year that preceded it, such as the summer concert series, bicentennial celebrations during the county fair and a separate bicentennial day at the fairgrounds in the fall.

Lawrence County was formed on Dec. 20, 1816, when it was created from portions of Scioto and Gallia Counties.

Members of the Lawrence County Museum were on hand, dressed as figures from the county’s past.

The museum also had a display set up, featuring a number of historical photos, such as the construction of the old Ironton-Russell bridge, which closed last month after 94 years of service.

Two of the officials on hand for the celebration boast deep family ties to the county.

In his remarks, Pratt said his family first purchased land in the area in 1837.

“So Lawrence County is only 20 years older than that,” he said. “We have a strong heritage.”

County Treasurer Stephen Dale Burcham said his ancestors, John Sylvester Burcham and Nancy Burcham moved to the county in 1808, taking up residence in the Scottown area.

“They had 11 children,” he said. “And he was one of the first justices of the peace in the county. So politics in the family runs way back.”

Burcham said he had two grandchildren in attendance at Tuesday’s event.

Following the celebration, refreshments were served and the committee raffled off a special bicentennial gun, one of only 25 made, for the year’s events.