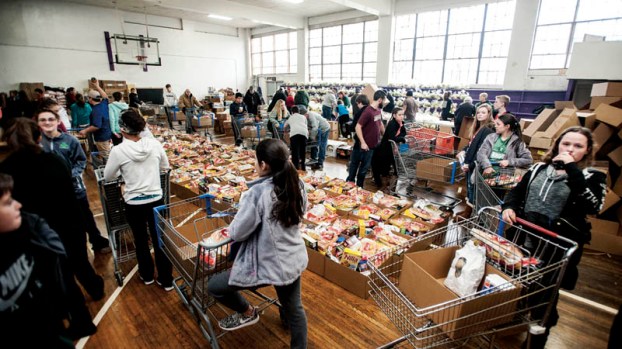 The Community Mission Outreach in Chesapeake during its annual Christmas giveaway.

A tradition of caring

CHESAPEAKE — Cars were lined up at the Chesapeake Community Center on Wednesday for the annual Christmas giveaway to those in need.

The event, which has taken place for 37 years, is organized by Chesapeake Community Mission Outreach and served more than 500 area families.

In the gymnasium of the building, which once served as Chesapeake’s high school, volunteers were loading up shopping carts with boxes containing items such as potatoes, stuffing, cake mix, rolls, flour, rice green beans and more, along with a basket of fruit.

Then food was then wheeled to the rear of the building, where it was picked up by those who had registered with CMO in advance.

Recipients, who came in a steady stream throughout the morning, then got a choice of a turkey or ham for Christmas dinner.

“Are there any children in your household,” Don Moore, the chairman of the board for CMO, asked a driver. “I just want to make sure people are aware we have toys for kids.”

Those who went inside could find at the toy room, where they were greeted by Santa. The room was loaded with items for children.

Organizers had feared a shortage of toys, as the charity the group usually works with had prioritized for flooding victims in West Virginia and was unable to provide donations to Lawrence County this year.

However, as word of the need got out, donations came in and made up the difference.

“The community really stepped up,” Ruth Damron, the community center’s director, said. “We got lots of toys, and they’re high quality.”

Volunteers, from groups such as Chesapeake United Methodist Church, St. Ann’s Parish and Chesapeake schools had been at work for two days, getting items ready for the giveaway.

On Tuesday, students from Fairland Middle School’s Beta Club, an honors program at the school, were on hand to help out.

In all, 35 students were taking part in the effort, Jim Roberts, a teacher at the school and the group’s advisor said.

One Fairland student, Luke Colegrove, decided to return on Wednesday, even though school was out.

“I was here all day yesterday and came to help again today,” he said.

Cheryl Johnson, of Proctorville, who attends St. Ann’s, said the students were a tremendous help.

“It’s been such a blessing that we had the kids,” she said.

She said that five different area churches were taking part in the event.

“We also bring our grandkids to help,” she said. “We have so many volunteers.”