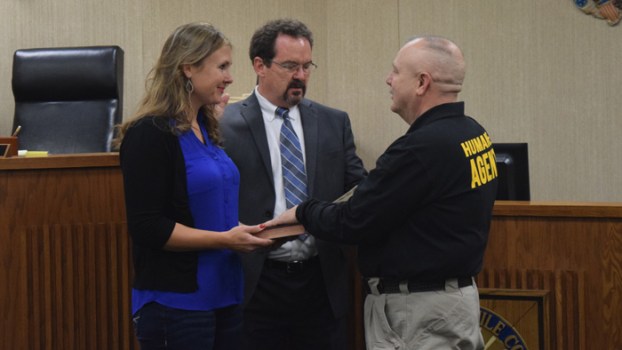 With his wife Sarah holding the Bible for him, Randy Thompson took his oath as the new Humane Society Animal Control Agent in Judge David Payne’s courtroom Thursday morning.

Thompson, who also serves as supervisor for Lawrence County Child Protective Services as well as working as a police officer in the Village of Proctorville and Chesapeake, explained that he had been interested in protecting animals for some time. He raises and breeds German Shepherds and keeps chickens.

This love of animals led him to become involved with the Humane Society and eventually to take on his new role.

“I had been exploring this and happened to be camping and ran into somebody who is involved with the Humane Society,” he said. “They told me when the meetings were, so I started going. They were interested in hiring an agent at the time as well, so I put my application in… and that’s how it all began.”

The Humane Society, he explained, has the authority under Chapter 1717 of the Ohio Revised Code (ORC) to appoint an agent. That agent then has the responsibility to enforce the laws under Chapter 959 of the ORC.

“So it’s investigating abuse, neglect and abandoned animals,” he continued. “The emphasis of course is on educating the owner so that they can stay with their animal and be able to provide it with a suitable environment, food and treatment that all animals need.”

If that isn’t an option, however, they can seize the animal.

“Yes, we can seize the animals,” Thompson said. “People can also voluntarily surrender animals. But if someone loves their animal and just doesn’t know how to take care of it, then what we would do is educate them on how to take care of it. If they can successfully do that then everything is great. If they cannot then that is when we have to intervene on a level that requires them to forfeit the animal or us to seize and impound the animal.”

This can go for any animal, from a pet iguana or hamster to livestock like cattle or horses. If it is a domestic animal, it falls under the purview of Chapter 959. Thompson, for his part, is eager to protect them all.

“I’ve noticed there seem to be a lot of people around here that just don’t take very good care of their animals,” he said, continuing to explain his motivation for taking the job. “I thought it would be a great thing to join the Society in their efforts to make sure the animals are better taken care of.”