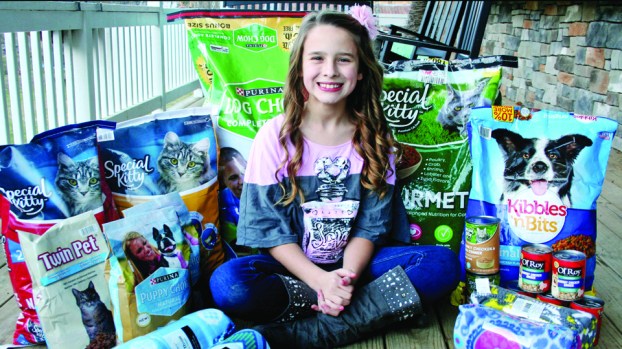 Isabelle Jenkins, 10, of Kitts Hill, purchased supplies for the Lawrence County Animal Shelter through a fundraiser she organized at her 10th birthday party.

The Lawrence County Animal Shelter received a significant donation on Thursday, thanks to the efforts of a Kitts Hill girl.

Isabelle Jenkins, a student at Sugar Creek Christian Academy, celebrated her 10th birthday earlier this month and decided to don a set of scrubs and use the occasion for a cause she believed in.

“She’s always wanted to be a veterinarian,” her mother, Lori Jenkins, said.

A box was put out at the party, soliciting donations for the shelter to buy food and supplies.

In total, she raised $84 for the effort.

“She mainly used her birthday as the platform to get it,” Lori said. “And she got money from family and friends.”

Her father, Clifton Jenkins, said her career aspiration was part of inspiration.

“But it comes straight from her heart,” he said. “It’s the way she does things.

On Thursday morning, Isabelle was wearing a headband with cat ears and legging decorated with a cat motif, as she was preparing to drop the supplies off at the shelter.

Using the donated funds, she was able to purchase food, blankets, litter and other items.

Her mother said the family hopes this will be start of a tradition.

“We’re going to keep doing this every couple of months,” she said. 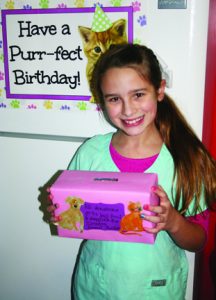 Isabelle Jenkins, 10, of Kitts Hill, used her birthday party as a fundraiser for the Lawrence County Animal Shelter.

A new store in Ironton is helping to raise money for a good cause. Nancy’s Nook, opened on Park Avenue,... read more