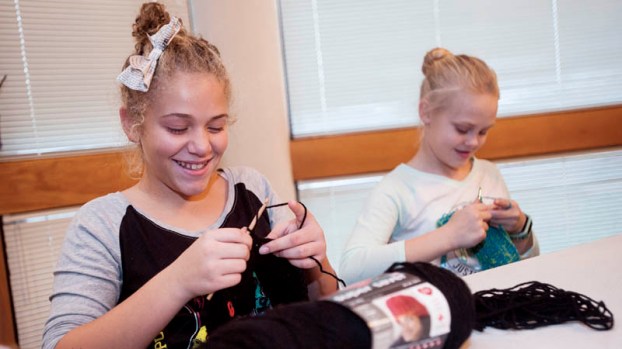 SOUTH POINT — With the holidays out of the way, programming has resumed at the Briggs Lawrence Public Library system.

On Tuesday, the Crochet Club met at the South Point branch of the libraries.

Darlene Kranz, of the group, said they usually draw about 10-12 people for the weekly meetings.

“We’re working on just anything,” she said. “Everyone’s doing their individual projects.”

The adults in the group were also joined by South Point Middle School students, such as Allison Williams, 11, who was making toys for her cat.

Johnson has been attending meetings since the summer before last and has sold some of her work, recently making $30.

“My brother is in elementary school, and he wants to learn to do it,” she said.

In addition to the Crochet Club, the South Point branch has several events scheduled for January, such as preschool storytime, which takes place every Wednesday at 11 a.m., Game On! Board game night for families on Jan. 12 at 4 p.m., Briggsy’s Block Party LEGO fun or Jan. 18 at 4 p.m. and tax assistance, provided by AARP on Jan. 27 and Feb. 3, from 10 a.m.-4p.m.

Storytime also takes place at other branches of the library, in addition to various clubs and discussions.

For more information, visit the library system’s website at www.briggslibrary.com.

Investing in the river