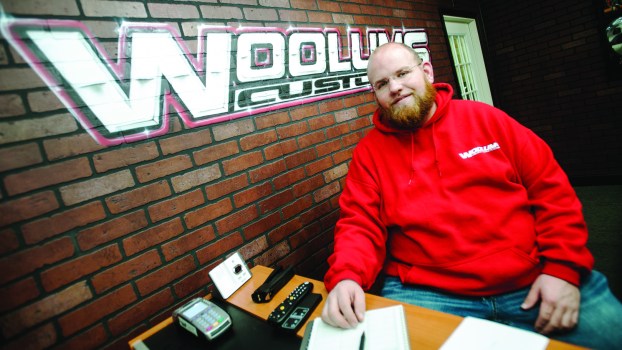 Jessica St. James/The Tribune Jacob Woolum is the owner of Woolum’s Customs, which features everything from detailing, installation, back up camera etc.

SOUTH POINT — A new car customizing business has been open since Dec. 15 in South Point, and its owner says the reception has been positive.

“It’s been good so far,” Jacob Woolum, owner of Woolum’s Customs, said of business, which was steady, despite the holidays.

Woolum said the business employs one other person, Brandon Penn, besides himself, and will soon hire Buddy Barker as a part time worker.

He said the idea for the business, which is his first attempt, came when Barker, who has worked in customizing for 20 years, and others saw the company they were working at close.

Woolum decided to open his own location offering those services, renting a spot in the Ohio Valley Industrial Park owned by Paul Hart.

Woolum, who lives in Huntington and previously worked at Marshall University said he and the employees have been friends for years.

He was the first tenant for the building, which was an empty warehouse. In preparation for the opening, he built a front room, which features the airbrush work of his friend.

“He also did all my shirts and signs,” he said.

In addition to installation, Woolum said the shop is stocked for those seeking to buy stereo equipment, offering speakers and other items.

Woolum’s Customs is open Monday-through Friday from 9a.m.-5 p.m. and on Saturdays from 10 a.m.-2 p.m. by drop-in or appointment.

CINCINNATI (AP) — For the third time in less than a decade, the use of traffic cameras by Ohio cities... read more