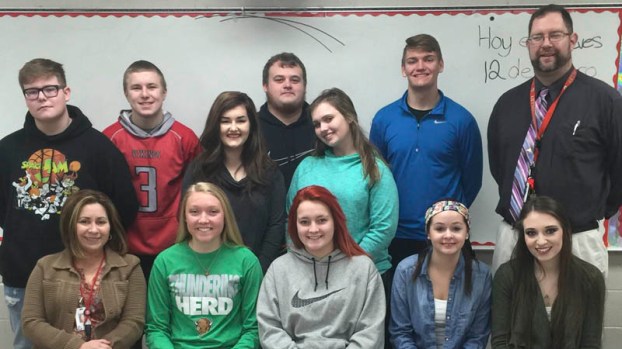 Symmes Valley students to travel to D.C. for inauguration

Berry’s love of the subject he teaches is reflected in his passion for Washington D.C. He once served as a tour guide there, and has taken several student groups to the city over the years. He’s especially excited, however, for the chance to take a group to experience the inauguration of a new president.

“It doesn’t matter who it is,” he said. “It’s the process. It’s the President of the United States. If it had been Hillary Clinton, or Donald Trump, my students realize that it’s (about) respect(ing) the office. That’s what it requires, and that is what we’re going to do. Respect the event. So we’re excited about it.”

Berry actually started planning the trip with the kids from his Junior class in April of last year, long before they knew who the nominees would be, much less the president-elect. Since then they’ve watched one of the most contentious elections in recent memory, if not history, play out. But this has actually been helpful for Berry in teaching his class, as it has maintained the attention of his students in ways that more traditional and staid campaigns might not have.

“That’s been a fun thing too,” Berry said. “This year, where the standards (for) testing are different for government in the state of Ohio now, we really did an in-depth look at the political process. We looked at the primaries. We looked at, after you go through the primaries, the general election, (then) the electoral college, and about six weeks before the actual election, our kids started realizing that it probably wasn’t going to be a Clinton landslide like everyone thought. Then, about two weeks before, when we had done a project with phone surveys… they figured out that it probably was going to be a Trump win.

“Even though our area was obviously a Trump area (based on their phone surveys) we also looked at the electoral college map for the past 32 years,” he continued, “and when we did that we mapped it out and figured that a lot of these swing states would go Trump. So we… planned our trip before the general election, before the primaries, and were already excited and wanted to go. Then, (the nature of this election) helped me teach it a lot easier. Because the kids, they’d have had no interest whatsoever (in a traditional election cycle)… (Instead), I had some good fights in my classroom.”

He said that in the group he was taking, Trump supporters outnumbered the kids who identified as Clinton supporters nine to two, matching the political demographics of their region. Regardless of where his students’ political loyalties might lie, though, he thinks D.C. will be a meaningful trip for all of them. Not just because of the opportunity to take part in an inauguration, which is a significant historical event in its own right, but also the activities they have scheduled and the experiences he has had with other students in the city.

“We’ll leave here at 3 o’clock in the morning on the 18th,” he said. “We’ll drive to Washington D.C. We’ll do the monuments tour on the 18th during the day time. On the 19th, we’ll go to Mt. Vernon, then to Arlington Cemetery that afternoon. On the 20th, we’ll get up about 4 in the morning…, go through our security checkpoints… watch the inauguration, watch the oath of office… we’ll see a little bit of the parade. Then we’ll go to the Holocaust Museum.

Then, that evening, there is a ball that we’ll be going to. Then, the next day, we’ll do the Smithsonian museums.”

He continued talking about their itinerary, noting the impact that these other events in the capital could have on students. He shared the story of a previous trip where a special needs student visiting the Holocaust museum stood looking at a spare crib, stripped down to bare metal, when a realization struck him.

The student looked up at Berry and said, “I just realized, I wouldn’t have been here.” As the two girls on either side of him burst into tears, the student reached up and patted them on the shoulders, saying, “It’s okay. I’m here now.”

Moments like this, he explained, where students really connect with history and it becomes real to them, are what makes D.C. one of his favorite places to visit, even after numerous trips over the years.

Berry said that his class participated in fund raising events and accepted donations to cover half of the $850 per student cost of the trip, with the students supplying the remainder of the costs themselves. He said that individual politicians from both parties stepped up and donated at their various events, but that he wanted to extend a special thanks to the Lawrence County Democratic Party for answering his call for donations, as well as new County Commissioner DeAnna Holliday, who donated and supported his efforts at every fundraiser they held. He also credits a little divine intervention for their success.

“I believe the Lord took care of us,” he said.

Though it has been an intensive experience, he says he would definitely consider doing it again in another four years, or any time he has the opportunity to take a group to D.C.

“I can’t wait to see their faces,” he said with a grin.

Independent company would handle ticketing for share of fines Coal Grove Village Council heard a presentation from, and entered into... read more