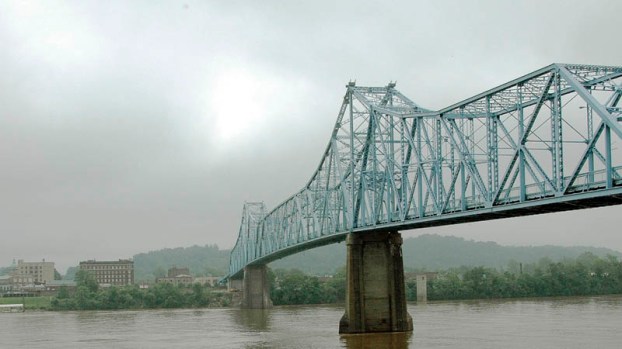 The old Ironton-Russell Bridge is expected to be dismantled by the end of spring.

End of an era

Old bridge expected to be dismantled by late spring

It’s been a familiar site to the Tri-State for nearly 95 years, but, by summer, the old Ironton-Russell Bridge will be no more.

According to Ohio Department of Transportation spokesperson Kathleen Fuller, crews have already started the early stage of dismantling the cantilever bridge, which
closed to traffic on Nov. 23, 2016, following the opening of the new Oakley C. Collins Memorial Bridge upstream on the Ohio River.

Fuller said crews from a contractor have started the process of separating the main span, which will be lowered to the river in the spring.

“There isn’t a set date yet,” Fuller said, noting that it will depend on the weather and the depth of the river at the time. An announcement from ODOT will precede the lowering, she said.

“It will take all day, and they will have to coordinate with the U.S. Coast Guard, because it will stop river traffic,” she said.

Following the lowering of the main span, from which the steel will be recycled, crews will then remove the remaining parts of the structure from the top of the piers, she said.

After this is done, the piers will be dynamited.

“For people wanting to see an explosion, they’ll have that,” Fuller said.

After the bridge and piers are gone, crew will then work to clean up the river in the area, she said, expecting, if all goes according to plan, this to be completed by May.

Fuller said nesting boxes for peregrine falcons, located on the old bridge are being moved by Ohio Department of Natural Resources workers to underneath the towers of the new cable-stayed bridge.

“This is being done before nesting season,” Fuller said. “The hope is that the falcons migrate naturally to the new bridge.”

The birds, a protected species, have nested on the old bridge from March through June.

The old bridge, which is the oldest remaining cantilever bridge on the Ohio River, opened as a toll span in August 1922, shortly after its completion.