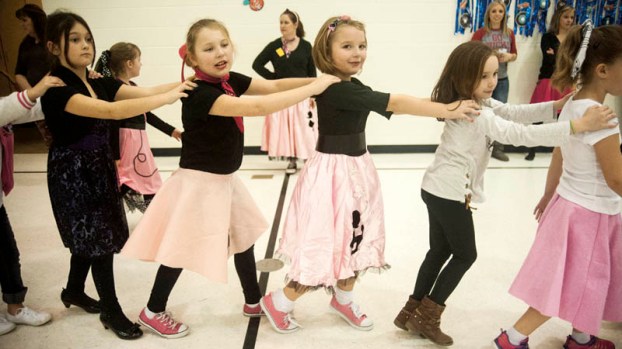 BURLINGTON — Students with good behavior at Burlington Elementary were awarded with a trip back in time on Thursday.

A 1950s-themed sock hop took place at the school, and children, dressed as Pink Ladies from ‘Grease,” or wearing poodle skirts, leather jackets and other attire of the era got to dance, do the limbo, the twist and other activities in the gymnasium.

After the dancing, they were treated to root beer floats in the school cafeteria.

“We’ve been doing it for about three years,” he said.

The event is coordinated by parent volunteers and attended by those with a good record at the school.

“They can’t have any more than one mark against them,” Clay said of the criteria to attend.

Good behavior parties are common in the South Point school district. Students at South Point Elementary were treated to a DJ and dance party at their school on Friday.