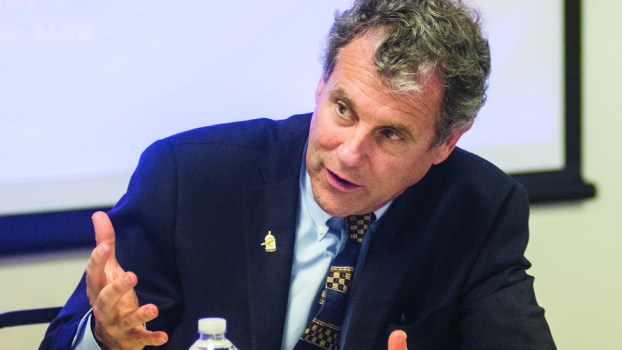 Senator sees room for common ground, cause for opposition with incoming administration

WASHINGTON — U.S. Sen. Sherrod Brown, D-Ohio, says he will attend today’s inauguration of Donald Trump, and is outlining where he sees a chance for common ground with the new president of the United States and where he feels he must oppose his agenda.

Brown said that he has reached out to Trump and outlined what he says needs to be done to create fair trade conditions for U.S. and Ohio workers, such as renegotiating the North American Free Trade Agreement, pulling out of the Trans-Pacific Partnership and instituting a “Buy America” policy for the federal government.

He said Trump responded to his message with a personal note.

“He said he would not let workers down,” Brown said.

However Brown said he would oppose Trump on issues where he is in opposition to the new administration, where he feels it is out of step with mainstream views in the nation and Ohio.

“I’ll work with him where we agree, but I will work against him if he tries to implement a billionaire’s agenda,” Brown said.

Brown said these issues of concern include raising the retirement eligibility age for Medicare to 70, privatizing the Veterans Administration, and turning public schools into for profit charter schools.

Brown said Trump’s positions on these are in opposition to many of his own voters.

Trump criticized both U.S. Sen. Ted Cruz, R-Texas, and former U.S. Sec. of State Hillary Clinton during the presidential campaign for what he said was too cozy of a relationship with the finance company.

However, since the election, Trump has named several with ties to the company, which was bailed out in 2008 following the economic crash, as cabinet picks and White House staff.

“It’s like a retreat for Goldman Sachs executives,” Brown said of the coming administration.

Former Goldman figures include ex-partner, senior manager and hedge fund investor Steven Mnuchin, who has been tapped by Trump to serve as treasury secretary, and investment banker Steve Bannon, who will serve as chief of staff for the incoming administration.

Brown said he is not opposed to all of Trump’s cabinet picks, noting that he has only came out in opposition to U.S. Sen. Jeff Sessions, R-Alabama, as the nation’s attorney general.

Brown said he has only had a chance, so far, to question one nominee, retired neurosurgeon Ben Carson, who Trump has picked to lead the Department of Housing and Urban Development.

“He said I reminded him of Columbo,” Brown said, referring to the famously-disheveled, gravely-voiced police lieutenant portrayed on television by Peter Falk, to whom he has been compared before. “I don’t know if that’s a good or bad thing. It comes down to ‘Do you like Columbo?’”

Brown said he has serious issues with many Trump nominees, such as Betsy Devos, the billionaire businesswoman chosen for U.S. Secretary of Education, and U.S. Rep. Tom Price, R-Georgia, who has been tapped to lead the Department of Health and Human Services.

“They’re way outside the mainstream of what the country stands for,” Brown said.

He said his concerns with Price are based on the congressman’s efforts to raise the eligibility rate for Medicare, which he finds “morally repugnant,” while he takes issue with Devos on charter schools and privatization.

Brown said Devos has spent her career, using her inherited wealth, to lobby to turn public schools into for-profit private schools and stated she has “had nothing to do with public education.”

He also cited a $5.3 million fine assessed against a Devos-chaired pro charter school organization, All Children Matter, for campaign finance violations in Ohio in 2008.
Brown said Devos has still not paid the fine, something he said she is easily capable of doing, given her wealth.

“She’ll be in charge of making students pay back student loans, but she has a bill she refuses to pay to the state for a law she violated,” Brown said, stating the amount would translate into the hiring of 97 teachers. “If she really cares about education, she could start there.”

Brown was asked about the more than 50 Democratic members of Congress who said they are boycotting today’s inaugural festivities.

“I don’t judge anyone for going or not going,” he said.

Brown, who is up for re-election in 2018 in a state carried by Trump in 2016, said the coming campaign, in which he faces a re-match with Republican Ohio Treasurer Josh Mandel, would not influence his decision on when to work with a Trump administration. He stressed an interest in cooperating with the new administration on areas of agreement.

“I’m not listening to policy advice based on the 2018 election,” he said. “My job is to advance the interests of Ohioans and the country.”

NOTE: Since Wednesday’s conference call, Brown has announced that he will not vote to confirm Devos or Mnuchin for their positions. Brown said Mnuchin has failed to respond to questions about Wall Street and housing rules that he sent him about a
month ago.