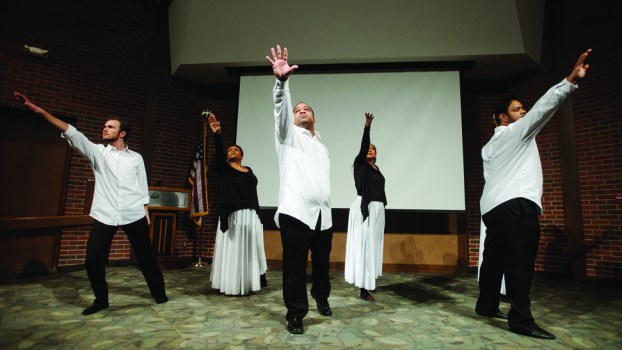 Ohio University Southern marked 25 years of its annual celebration of the legacy of Dr. Martin Luther King Jr. on Thursday.

A community celebration took place in the Bowman Auditorium on the school’s Ironton campus, drawing a packed house, along with speakers and performers from a diversity of ethnicities, genders, and religions.

The event opened with the singing of the national anthem from the Ironton High School Varsity singers, followed by remarks from Ironton Mayor Katrina Keith.
Keith said, as the first female mayor of the city, she could relate to the civil rights legend, as she knew what it was like to operate in uncharted territory.

She said King’s work taught her the importance of serving a cause bigger than one’s self.

“Do you have a bigger purpose?” she said. “Be different. And I challenge you to do it with love and not bitterness.”

She said it is important to honor King for what he made possible.

“And we should think of those who came before so that I could stand here today,” she said.

J.D. Crockrell, the assistant pastor of Christ Temple Church in Ashland, said King’s message “is just as important today as it was 50 years ago. ”

Isaac Adams, the deacon of the New Jerusalem Christian Center,  thanked the university for “shining a light on black history.”

Like Crockrel, he encouraged the audience to communicate more with each other.

“Don’t fear me, get to know me,” Adams, who has worked in corrections for more than 20 years, said. “I’m here tonight because I’ve been labeled a black man, but that’s something I’m very proud of.”

He spoke of the struggles of African-Americans throughout U.S. history.

“It’s hard to fly with eagles when your wings have been clipped by a long history of oppression,” he said.

But he said it is important to “keep moving forward.”

“Love conquers all,” he said.

The event featured a number of performers, in addition to the Varsity Singers, such as the cast of the Paramount Arts Center’s performance of the musical “Rent,” who sang Seasons of Love,” interpretive dancers from the community, who performed to “Precious Lord,” and a rousing rendition of “I know Where I’ve Been,” from the musical “Hairspray” sung by OUS student Susan Taylor.

“I’m not sure how I’ll follow that,” Ironton police chief Dan Johnson said, after having to speak next.

Johnson told the crowd of his upbringing, which he said was “an exclusively white” one, having been raised “up the holler” near Portsmouth.

He said he never had a conversation with a black man until his early 20s, when “Roots” author Alex Haley visited Portsmouth for a book signing.

“That was my first interaction with a black person,” Johnson said. “I lived on a racial island until then.”

He said it was joining the military that allowed him to expand his perspective.

“I served with people of all races, economics, ethnicities and backgrounds,” he said. “It changed me. It really did.”

He said his 32 years in law enforcement have led to him seeing lots of horrible things and lots of great things in people.”

He also asked the crowd to give officers “a fair shake.” Johnson said that while there are some racist and corrupt people in law enforcement, like any profession, they do not represent the majority of good.

“I think people are innately good,” he said, stating that it is important for people to embrace their differences.

Two of the speakers spoke of overcoming the negative attitudes they have encountered.

Malak Khader, a graduate student at Marshall University, who serves as a board member for the West Virginia Civil Liberties Union and troop leader for the Girl Scouts, is of the Muslim faith.

“I am who I am because I’m fortunate to have been raised in a healthy environment that nurtured curiosity,” she said.

Khader said, beginning at the age of 15, she practiced her faith in the way that she dressed. Which led to verbal and physical harassment.

“I’ve learned a lot and grown a lot from my negative experiences,” she said. “My hope is that no one has to experience that. No adult or child should have to go through that.”

She spoke of her Girl Scout troop, which she called “the most awesome in the state,” which is ethnically diverse.

“When we started the troop, they didn’t get along,” she said. “It took a couple of lectures and meetings and they were sisters. I wish that everyone was as open-minded as these girls are. It starts with children.”

She said one of the girls once asked her “What color is God?”

“I told her that he could be any color,” she said. “But that’s not why we love God. We love him because of what he has done for us.”

She said the two things she has most taken to heart most from King are to be patient and realize change does not happen overnight, and to be more vocally active in the community.

“Everyone deserves the same basic human rights,” Khader said. “If you see someone treated unfairly, stand up for them as if they were a member of your own family.”

“I am a smart, creative fun, loving, bubbly, happy college student,” she said. “But it’s hard for me to show that.”

Marcum said, at the age of 10, she was diagnosed with a brain tumor, which left her partially paralyzed on her left side.

“I overcame it, and I’m a better person,” she said, noting that it was difficult process, having to learn again, following surgery, to do things like walk or tie her shoes.

“It was really hard, and caused a lot of tears and pain,” Marcum said. “But nothing like having to deal with people’s rude and dehumanizing comments as a disabled person.”

She said she sees her disability as “a blessing in disguise.”

“It gives me more purpose than I could dream,” she said, stating she has made it her mission to help others with disabilities, by doing things such as interning at the Open Door School and giving speeches.

Like the other speakers, she said she learned from King that communication is key.

“We need to talk to each other and understand each other,” Marcum said.

She shared what, throughout her experiences, she has found to be the most important thing she has learned.

“Different is beautiful,” Marcum said, asking the crowd that if they remembered nothing else from her speech, to focus on that message.

Following the speakers, Taylor led everyone in a sing-along of “We Shall Overcome,” the civil rights anthem popularized by folk singer Pete Seger.

This year’s King celebration was longer than those of previous years.

Traci Tillis, the marketing director for OUS, said it was partially due to the 25th anniversary of the program.

“We wanted to honor those from years past,” she said.

But she said the program was also designed as a kickoff for the “I am” initiative, which is a year-long effort of the school to promote diversity and encourage communication.

Attendees were asked to take photos for the effort following the presentation, giving them a chance to tell their stories, while bracelets, reading “Communication > Fear” were distributed to the crowd.

OUS has a number of programs planned for the next few months around this message.

• A course on the Underground Railroad in Burlington and Ironton will be offered from Feb.1-22, meeting on Wednesdays from 7-9 p.m. The cost is $39.

• An MLK Interfaith Dialogue event is set for Feb. 28, offering a conversation on faith and race.

• The OUS Envision Access Conference, addressing awareness and needs of those with disabilities is scheduled for March 24, from 8 a.m.-1 p.m.

• The Women of Appalachia Project’s “Women Speak” event, offering an evening of poetry, story and song, is set for March 31 at 6 p.m.

For more information on these programs, visit the university’s website.