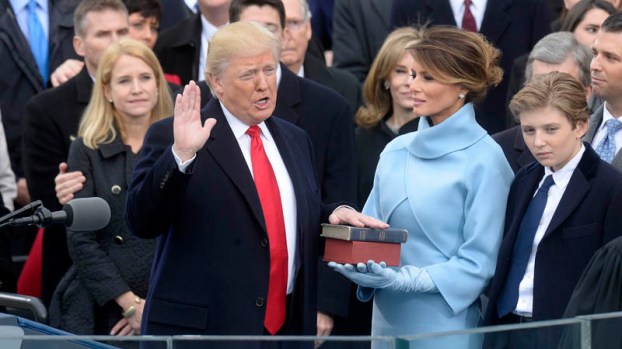 WASHINGTON (AP) — Pledging emphatically to empower America’s “forgotten men and women,” Donald Trump was sworn in as the 45th president of the United States on Friday, taking command of a riven nation facing an unpredictable era under his assertive but untested leadership.

Under cloudy, threatening skies at the West Front of the U.S. Capitol, Trump painted a bleak picture of the America he now leads, declaring as he had throughout the election campaign that it is beset by crime, poverty and a lack of bold action. The billionaire businessman and reality television star — the first president who never held political office or high military rank — promised to stir a “new national pride” and protect America from the “ravages” of countries he says have stolen U.S. jobs.

“This American carnage stops right here,” Trump declared. He issued a warning to the world: “From this day forward, a new vision will govern our land. From this moment on, it’s going to be America first.”

Eager to demonstrate his readiness to take actions, Trump went directly to the Oval Office, before the Friday evening inaugural balls, and signed his first executive order as president — on “Obamacare.”

The order notes that Trump intends to seek the “prompt repeal” of the law. But in the meantime, it allows federal agencies to delay implementing any piece of the law that might impose a “fiscal burden” on states, health care providers, families or individuals. Trump brought his signature style to the task of governing, sprinkling his comments at three inaugural balls with references to “phony polls,” campaign victories and social media.

“Let me ask you: should I keep the Twitter going?” he asked a cheering crowd of supporters before dancing with his wife, Melania, to Frank Sinatra’s “My Way” at the second ball. “The enemies keep saying, ‘Oh that’s terrible,’ but it’s a way of bypassing dishonest media.”’

Trump also formally approved two former generals confirmed to Cabinet posts earlier by the Senate: James Mattis as secretary of defense and John Kelly to head the Department of Homeland Security. Vice President Mike Pence swore them in soon after.
Mattis struck a different tone from his new boss in his first statement to his department: “Recognizing that no nation is secure without friends, we will work with the State Department to strengthen our alliances.”

At the inauguration, the crowd that spread out before Trump on the National Mall was notably smaller than at past inaugurals, reflecting both the divisiveness of last year’s campaign and the unpopularity of the incoming president compared to modern predecessors.

After the swearing-in, demonstrations unfolded in the streets of Washington. Police in riot gear deployed pepper spray after protesters smashed the windows of downtown businesses while denouncing capitalism and the new president.

Short and pointed, Trump’s 16-minute address in the heart of Washington was a blistering rebuke of many who listened from privileged seats only feet away. Surrounded by men and women who have long filled the government’s corridors of power, the new president said that for too long, “a small group in our nation’s capital has reaped the rewards of government while the people have borne the cost.”

His predecessor, Barack Obama, sat stoically as Trump pledged to push the country in a dramatically different direction.

Trump’s victory gave Republicans control of both the White House and Congress — and all but ensures conservatives can quickly pick up a seat on the closely divided Supreme Court. Despite entering a time of Republican dominance, Trump made little mention of the party’s bedrock principles: small government, social conservativism and robust American leadership around the world.