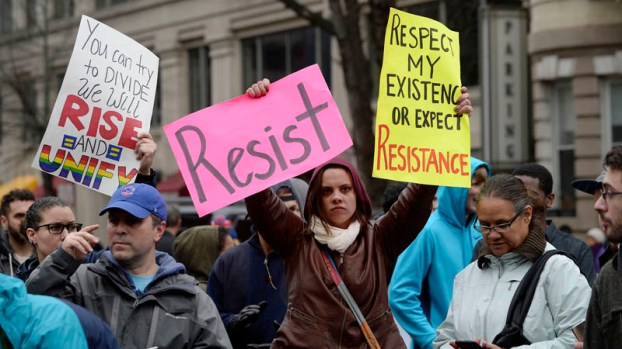 Women around the world decry Trump

WASHINGTON (AP) — Wearing pink, pointy-eared “pussyhats” to mock the new president, hundreds of thousands of women took to the streets in the nation’s capital and cities around the world Saturday to send Donald Trump an emphatic message that they won’t let his agenda go unchallenged over the next four years.

“We march today for the moral core of this nation, against which our new president is waging a war,” actress America Ferrera told the Washington crowd, which included plenty of men, too. “Our dignity, our character, our rights have all been under attack, and a platform of hate and division assumed power yesterday. But the president is not America. … We are America, and we are here to stay.”

The message reverberated through a remarkable collection of outsized demonstrations around the globe — from New York, Philadelphia, Chicago and Los Angeles to Paris, Berlin, London, Prague, Sydney and beyond. It all served to underscore the degree to which Trump has unsettled people in every hemisphere.

Turnout in Washington was so big that the original march route alongside the National Mall was impassable. Instead of trekking en masse to the Ellipse near the White House as planned, protesters were told to head there by way of other streets. And with that, throngs surged in the direction of the White House in a chaotic scene that snarled downtown Washington.

“Hey, hey, ho, ho, Donald trump has got to go,” some marchers chanted.

Women brandished signs with slogans such as “Women won’t back down” and “Less fear more love” and decried Trump’s stand on such issues as abortion, health care, gay rights, diversity and climate change. In a five-hour-plus program, speaker after speaker branded Trump a sexist, a bully, a bigot and more.

In Chicago, organizers canceled the march portion of their event for safety reasons after the overflow crowd reached an estimated 150,000. In New York, tens of thousands converged on Trump’s home at the glittering Trump Tower on Fifth Avenue.

“I feel very optimistic even though it’s a miserable moment,” said Madeline Schwartzman of New York City, who brought her twin 13-year-old daughters to the Washington rally. “I feel power.”

Officials said the crowd in Washington could be more than half a million people, more than double expectations. The event appeared to have attracted more people than Trump’s inauguration on Friday, based on figures from transportation officials.

More than 600 “sister marches” were planned around the world. Organizers estimated 3 million people would march worldwide.

Seventy-one-year-old Allan Parachini, who traveled from Hawaii to the Washington march, called it “the most impressive crowd I’ve seen since Woodstock.”

Retired teacher Linda Lastella, 69, who came to Washington from Metuchen, New Jersey, said she had never marched before but felt the need to speak out when “many nations are experiencing this same kind of pullback and hateful, hateful attitudes.”

“It just seemed like we needed to make a very firm stand of where we were,” she said.

As the demonstrators rallied alongside the National Mall, Trump opened his first full day as president by attending a prayer service at the Washington National Cathedral, a tradition for the day after inauguration, and later visited the CIA. As he traveled around town, his motorcade passed large groups of protesters that would have been hard to miss.

Holt elected to replace McCown on Board of Elections