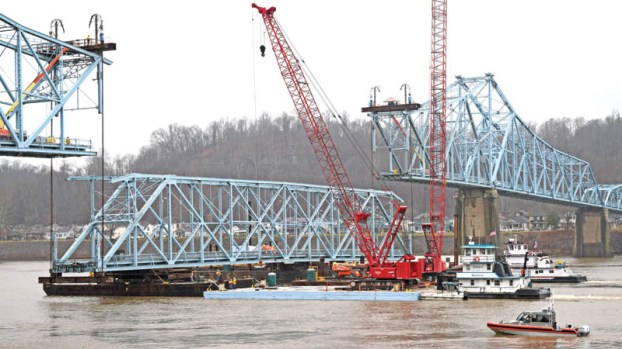 The middle section of the former Ironton-Russell bridge was lowered to barges on the Ohio River on Monday.

A 94-year-old connection between Ohio and Kentucky has been severed.

Crews removed the main span of the old Ironton-Russell bridge on Monday.

The dismantling began at about 10 a.m., when two river-based cranes started lowering the segment, which had been cut free from the rest of the structure, which closed to traffic on Nov. 23, to the Ohio River.

The pace was slow, but, by 1 p.m., the span was resting on a set of barges, where it was due to be taken to the Kentucky side of the river for scrapping.

Ohio Department of Transportation spokesperson Kathleen Fuller was on hand on the Ohio side, filming a time lapse video of the dismantling for the department’s website.

She said the contractor, Brayman, of Saxonburg, Pennsylvania, was slightly ahead of schedule in doing the lowering, which originally had not been expected to take place until late winter or spring.

“They wanted to get it out of the way before the birds roost,” Fuller said, referring to the peregrine falcons which nest on the bridge beginning in March.

The contractor, along with workers from the Ohio Department of Natural Resources, have moved two nesting boxes from the old bridge to the new Oakley C. Collins Memorial Bridge upriver.

Following the removal of the main span, Fuller said Brayman will then begin dismantling the cantilevers back to the Ohio and Kentucky sides, followed by removal of the approaches.

“It will be early spring before the majority of the bridge come down,” Fuller said.

After the bridge span is removed, crews will use dynamite to remove the support piers, which is expected to take place some time in March.

Fuller said after the removal is complete, crews will then work to clean the river, and all work should be finished by May.

The sections of the bridge will be cut up for scrap, Fuller said, adding that Brayman, who built the new bridge, has assumed ownership and salvage rights of the old bridge as part of their contract.

“It was replace, remove, relocate,” she said of the bid for the project.

Fuller said the city of Ironton has put in a request for steel from the bridge for use in a city project.

“We asked for one arch,” Ironton Mayor Katrina Keith said, stating the section should be removed as one piece. “And they’ve agreed to give it to us.”

Keith said the arch will be one of three on each side, which will be used to build a memorial to the bridge near its former approach, near the site of the Ironton splash park.

A crowd of onlookers gathered at the boat dock off Center Street in Ironton to watch the span being lowered.

One of the spectators was Roy Ratliff, the owner of Central Hardware.

“We didn’t even know it was going to happen today,” he said. “Then we saw all the traffic.”

Ratliff said the mantle of his home is comprised of timber from the wooden oak ramp, since replaced, which led to the bridge from the Ironton side in its days as a toll span.

“It’s been here 94 years, and it served the community well,” he said of the bridge.

Also watching was Carol Wheeler, of Willow Wood, who said she can remember her father paying a toll on the bridge when he would go to work.

“I wanted to see history being made today,” Wheeler said.

ROME TOWNSHIP — For the third straight year, the Wyngate at RiversEdge hosted its Community Chili Cook Off on Saturday,... read more