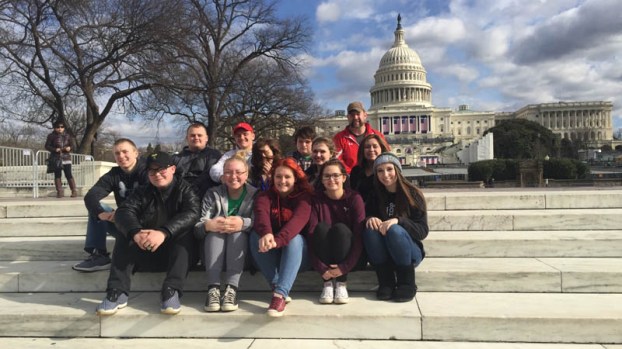 A group of Symmes Valley high School students who attended the inauguration of President Donald Trump last week have now returned home to share their experience with the community.

While the inaugural events were the main reason for the visit, they also took advantage of the trip to explore the history and culture of the nation’s capital. This included a variety of monuments, sites and museums, but it was the Arlington National Cemetery and the Holocaust Museum that seemed to make the greatest impact on the students.

“My favorite part of the D.C. trip was the Holocaust Museum,” said 11th grader Ethan Stapleton. “It was very touching, and it serves as a reminder not to forget the people who died during that time.”

“I loved learning new things throughout the museum,” Bradley said, “and you could feel the emotion in people as they walked through the museum.”

Emotions for the group of juniors were also strong at Arlington National Cemetery.

“Arlington Cemetery was truly a breathtaking and amazing experience,” said Hannah Lewis. “My great grandpa, my grandpa, and my brother-in-law were part of the United States Military, so I enjoy seeing memorials related to that. It was an honor to see all the men and women who gave up their lives for the price of freedom.”

“I loved the thought of it, to respect the people that have served,” added Kaitlyn Crabtree. “It also meant a lot to me because I have family in, (and who) was in, the service. Another thing was the layout of it. (It) was beautiful, honestly, breathtaking. I really liked how they put the spouses name on the back of the stones. It still focuses on the men and women that fought, but lets the couple lay to rest with each other.”

The numbers lost in the Civil War really stood out to Frankie Hunter.

“It was…really eye opening, as to how many people we lost in the Civil War,” Hunter said. “Definitely a breathtaking experience.”

The students spent a lot of time with kids from other schools as well, which they said they found valuable as they got to see things from other perspectives.

“My favorite part of the trip was associating with people,” said Garret Roberts. “I love meeting people from different areas, and D.C. is just the place for that. I got to meet many new people and I enjoyed every second of it!”

“I enjoyed spending time with my friends,” added Lewis, “and even meeting new friends on this trip. We set our political differences aside for a moment and just became friends. It was truly an amazing experience that I will remember for a lifetime.”

Those memories that will last a lifetime are exactly what government teacher Justin Berry was hoping the students would take away.

“I cannot say how proud I am,” Berry said. “They did great. They walked many miles, but they all took care of each other.”

Even amid the chaos of the crowds, and the protests that surrounded them, Berry said, the kids conducted themselves in a way that he felt reflected positively on the school system and the region.

“The protests did not faze them,” he said. “They were very mature in how they handled that.”

It wasn’t just the day of the inauguration, though, that his students impressed him and the other folks they encountered.

“They were complimented on every single day we were there,” Berry said, “upon their manners and their respect.”

Though they enjoyed the side trips, and learned a lot, the main reason for the trip was to see the inauguration, and Berry couldn’t be happier with how that went for them.

“The kids really got excited when we saw President Trump,” Berry said. “He was about 20 feet from us. They all got really excited about the oath of office. It was a huge deal and they really took in the moment.”

The inauguration, and specifically the events leading up to it, was Grace Jenkins favorite part of the trip.

“My favorite part of the trip was the pre-inaugural concert,” Jenkins said, “because it doesn’t get more American than Toby Keith singing in front of the Lincoln Memorial.”

Berry wanted to also thank the community for supporting them in their fundraising efforts to get the kids to D.C.

“Symmes Valley has given these kids memories that will last forever,” he said. “The kids really enjoyed meeting new people, and the other students were also quite taken by the way our students conducted themselves.

“I am humbled by the experience of taking such a great group and I am extremely proud of them,” Berry continued. “Their responses and their composure was amazing, and I am so thankful that the Lord gave me a chance to showcase my alma mater (and the community) that I am so very proud to call home!”

Berry also extended a special thanks to Spanish teacher and female chaperone Deja Miller, and bus driver Chad Johnson.
“They were incredible,” he said.

Fees not covered by funding from the state At its Jan. 19 meeting, the Executive Council of the Appalachian Family... read more