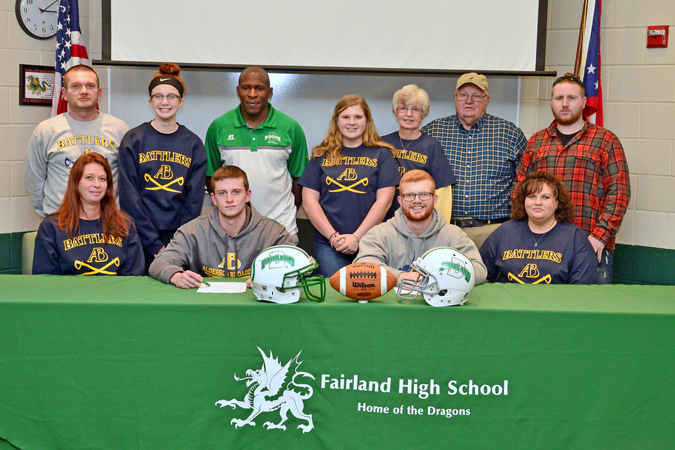 PROCTORVILLE — Much like the Beatles’ song, Fairland Dragons’ Jonah Galloway and Jordan Michael “Get By With The Help of My Friends.”
The long-time friends and football teammates will continue that bond after signing to play for the Alderson-Broaddus Battlers on Wednesday.
“We’ve had plans to go to the same place for a year or two now. If the opportunity showed itself we were going to take it. It did and it worked out. We’ve been friends since I can remember,” said Galloway.
Michael said having his friend along for the ride will help make the transition from high school to college smoother.
“It was a lot easier to go there and play with somebody I know. We’re really good friends and it’s going to be a lot fun,” said Michael. “It was fun in high school and I’m just happy he’s going up there with me.”
Galloway talked with Ohio Wesleyan, Marietta, Wilmington, Denison and Kentucky Christian. Michael showed interest in Wilmington and Kentucky Christian before settling on A-B.
“They were the highest division. They were D2 and the others weren’t. I liked going there because I got to go there and watch a game and I liked the atmosphere,” said Michael.
Galloway agreed that the atmosphere and team unity were the main drawing cards.
“Realistically, it just felt more like a family there. Everybody was more of a team and closer,” said Galloway.
“Even though there is 140-150 man roster, it seemed like everybody knew everybody and they do a lot of team building activities than a lot of other colleges that’s just a football team and has a varsity team and everybody else is just doing their own thing.”
A-B was 9-2 last season as they won the Great Midwest Athletic Conference title. But the Battlers graduated 40 seniors and Galloway likes their chances next season.
“I’ve been told there are competitive spots open to compete and try and fill. I’m looking forward to that. But I’m not sure what I’m going to be playing when I go up there. I’ll do my best to fill one of them,” said Galloway.
Galloway stands 6-foot and weighs 210 while Michael is 5-1, 200. The two All-Ohio Valley Conference selections were recruited on the defensive side of the ball, Galloway as an end and Michael as an outside linebacker.
Galloway told his recruiter that “I also play linebacker so we’ll see once I get up there what I have the best chance to compete and play.”
Michael isn’t sure if he’ll remain at his position, either.
“I’m thinking safety. I don’t think I’m as big as some of their linebackers. If I need to be a linebacker, then I’ll put on weight. I’ll do whatever it takes,” said Michael.
Both players were looking to play beyond high school.
“I always loved football and it’s awesome to be able to play four more years,” said Michael.
“I did want to play at the next level, but I never wanted to pay a substantial amount to do so. When the opportunity to get my college cutoff and play football as well, it was a no-brainer,” said Galloway.
As for the education aspect, Galloway plans to major in business while Michael is going to take a degree in education route.
“I’m definitely excited for them and not only for them but their families,” said Fairland coach Melvin Cunningham.
“The biggest thing with this aspect is it gives them an opportunity to change their life. This is not just about football. It’s nice that they get to go on, but it also pole vaults them into a different realm of life.
“When you go to college and get a college degree it opens up doors that may not otherwise open. I’m very excited for them.”

Meyer signs 21 in one of OSU’s best classes