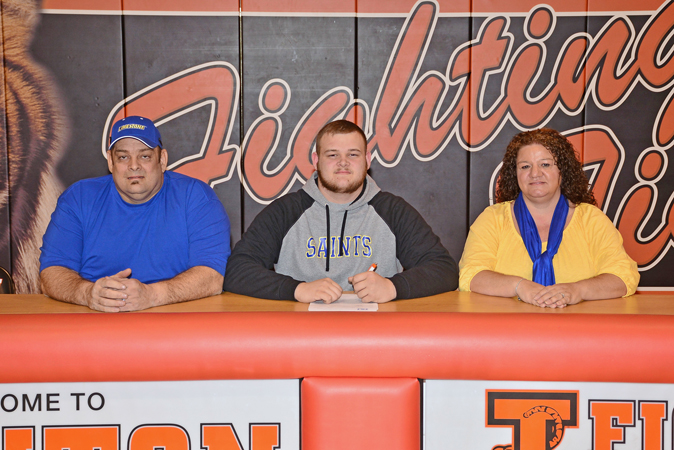 When the Webbs have a family reunion, don’t be surprised if Mike Furrey decides to attend.
When Robbie Webb played at Kentucky Christian University, Furrey was his head coach for two seasons.
During that time Furrey got to meet brothers Adam and Tyler, then just a seventh grade student at the Ironton Middle School.
Furrey is now the head coach at Limestone College and he hasn’t forgotten Tyler Webb. And how could he?
The 6-foot-6, 305-pound Ironton Fighting Tigers’ first team All-Ohio lineman and four-year starter has remained in the eyes of recruiters and on Wednesday Furrey took advantage of his past relationship.
“Every time he saw me and Adam he said, ‘Are you ready to sign?’” said Tyler.
On Wednesday, Tyler Webb let Furrey know it was time as he signed to play with the Saints.
Webb said his relationship with Furrey and the stressing of academics at Limestone were just what he wanted.
“I think it’s about where I’m going. I think football is second and school is first. Plus, I know the coaching staff. I feel more comfortable going there. It’s going to be a great deal going there because I get my education paid for,” said Webb who picked Limestone over Eastern Kentucky, Marshall, Pikeville, Marietta and Kentucky Christian.
Webb plans to major in criminal justice.
“Tyler is one of the most intense players I’ve ever coached,” said Ironton coach Mark Vass. “His motor is always running. He has great work ethic and gives 100 percent whether it’s a game or practice.”
The 6-foot-6, 305-pound Webb is a four-year starter for Ironton and a two-time All-Ohio selection.
He was named to the Associated Press Southeast Ohio All-District the past three seasons. He was special mention as a sophomore and was first team all-district as a junior and senior.
He was special mention All-Ohio his junior year and was named first team All-Ohio this past season.
“There’s a lot of opportunity for me going there. Coach Furrey told me to be ready to hit the field and be ready to play. I told coach Furrey when I hit the field you better be ready,” said Webb.
Robbie Webb told Furrey to be ready for his brother’s intensity and all-out effort in games and practice.
“You don’t have to worry about him being ready to play, you have to worry about controlling him,” Tyler said Robbie told Furrey who responded, “We just want a mean person out there ready to play.”
The Saints just completed their third season and first under Furrey, the former eight-year veteran NFL wide receiver who had a two-year stint as head coach at Kentucky Christian before serving as wide receivers coach at Marshall from 2013-15.
A private school, Limestone College is an NCAA Division II program with an enrollment of approximately 3,500.
“It’s a big change. Going to a school (Ironton) you’ve been at your whole life, it’s just a big change and it’s going to feel different. It’s going to be hard getting used to what they know and what they want. It’s just a mystery,” said Tyler.
Besides all his postseason awards, Webb got another honor when he was selected to play in the annual Ohio High School Football Coaches Association’s North/South All-Star game on April 29 in Massillon.
“I got a call one day. I almost missed the call. I wasn’t expecting it. Some coach was asking for me. He asked if I wanted to play in the North/South Game. My heart just dropped. I couldn’t believe it,” said Webb.
Players will report on Wednesday, April 26, for three days of practice.
Wednesday go to Massillon and practice for three days.