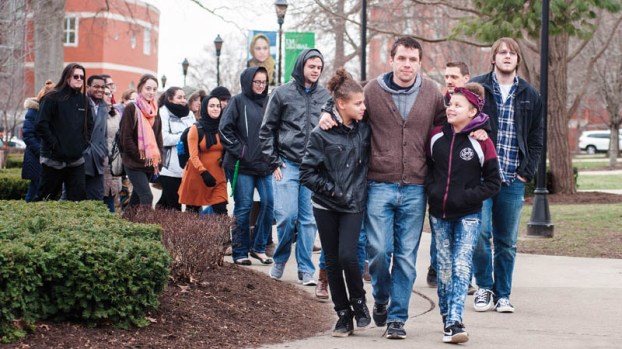 Students and factuality from Marshall University make their way through the center of campus during a protest.

HUNTINGTON — About 60 people gathered on Marshall University’s campus on Friday afternoon to show their support for the school’s international students.

The “Coexist” rally and march, which took its name from the popular bumper sticker promoting peace between the world’s religions, took place at the Memorial Student Center.

The events were organized following the executive orders of President Donald Trump, which suspended admission of refugees and denied entry into the United States from citizens of Iraq, Iran, Libya, Somalia, Sudan, Syria, and Yemen.

Protests have taken place nationwide in the wake of Trump’s announcement of the order.

Signs at the rally on campus featured slogans, such as “Love trumps hate,” “No ban, No wall,” and an excerpt from ”The New Colossus,” the sonnet from the Statue of Liberty’s pedestal, reading, “Give me your tired, your poor, your huddled masses yearning to breathe free.”

Marshall student Ethan Bartlett, of Ripley, West Virginia, said he organized the rally out of concern for students at Marshall who might be feeling the adverse affects in the current political climate.

“I just did it to show our acceptance and affection for international and Muslim students,” he said.

While there have been no reported instances of harassment on campus, he said it is important to show and tell those students that they are welcome.

One of the speakers at the campus rally was David Crawley, the president of Marshall University Young Democrats, a native of Liverpool, England.

“In 2004, I came to this country with my family in search of the American dream,” Crawley said.

He said that to deny entry into the country based on faith “is the most un-American thing I can imagine.”

Two members of the school’s Muslim community spoke at the event, thanking Marshall and Huntington for their support, and cited the signs with messages of solidarity, which were left at the Islamic Center of Huntington in the past week.

While there were no organized counter protests, one man, wearing a red “Make America Great Again” hat in support of Trump stood on the outskirts of the rally, watching the proceedings.

Following the rally, the group marched to the INTO building, which Bartlett described at “the hub for international students on campus.”

The university, which has more than 500 international students, released a statement last week, following Trump’s order, expressing support for Muslim members of its student body.

“We are currently checking to confirm how many students we have from the countries listed in the order, and we will do everything possible within the law to assist and retain all our international students,” Marshall University President Jerome Gilbert said in the statement.

The school pledged to assist its international students as the legal implications of the order were clarified.

“We will continue to monitor this evolving situation and, as more information becomes available, we will communicate with those affected members of our university community,” Gilbert said.

Trump’s policy hit a legal setback on Friday evening, when a federal judge in Seattle issued a temporary restraining order against the order blocking citizens of the seven countries named in the order.

On Saturday, the U.S. State Department announced it would allow people with a valid visa to enter the United States, while the Department of Homeland Security said it has suspended implementation of Trump’s orders, in accordance with the federal ruling.