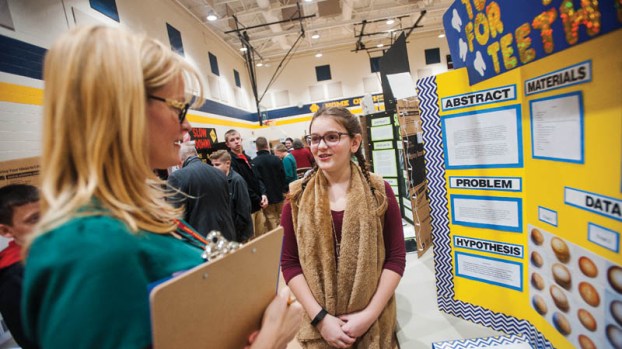 Sam Pay, a sixth grade student from Chesapeake, discusses her project with a science fair judge on Thursday.

This year’s event took place in the gymnasium, as the host school rotates annually, and was sponsored by the Lawrence County Educational Service Center.

She said the fair, in addition to research, gives students a hands-on learning opportunity.

“It’s the first time many of them have been told to do something you like,” she said of the topic selection for projects. “That leads them to get excited. Walters said taking part allows the students to learn the scientific method and to test a hypothesis through experimentation. She said if the student hypothesis is proven incorrect, it is not a bad thing.

“If it turns out different then they expected, it allows them to learn,” she said.

Walters said projects in the county fair won superior ratings at the students’ individual schools. Those who get a superior rating at the county level will then go on to compete at the district fair, set for March 25 at Rio Grande University.

Among the projects in the fair was “Roller Coaster Science,” by Lane Smith, a Rock Hill seventh grader.

“I love engineering and think it’s a cool subject,” Lane said. “I was trying to find a way to do something involved with that.”

Lane constructed roller coaster tracks of varying heights from foam pipe cleaner and used a marble as a car.

He hypothesized that the height of the hill on the track will affect how far the marble would go after the loop.

After three attempts for each height, he found the results matched his hypothesis.

Griffin Fuller, a sixth grader at Rock Hill, was attempting to find out if plants prevent soil erosion.

He filled a container with grass seed, one with soil and one with leaves. Water was then poured into the containers to determine erosion by testing the clarity after it collected into a jar below.

He found that the jar from the grass seed was the cleanest, while the dirtiest was from the soil.

Darius McCourt’s project was on the formation of stalactites and stalagmites, which form when minerals are deposited from hundreds of years through water dripping.

McCourt, a seventh grader at South Point, created a smaller and version from home.

“It’s easy to do,” he said of the process, which involved stretching cotton yarn between two glasses filled with Epsom salt. After a week, he said the formation appeared on a plate below the yarn as the salts collected.

Allison Ferrell, a seventh grader at Rock Hill was testing how dancers kept their balance.

“I love to dance, and I wanted to see if spotting helps you stay on balance,” she said.

Spotting is when the eyes remain focused on a particular object or location, she said.

To test this, she had four dancers do pirouette turns in trials, with and without spotting.

“I found that spotting does, in fact, help with balance,” she said of the results.

Judging for the fair took place in the morning. Students returned in the evening for the awards presentation.

“As I walked around today, it’s absolutely amazing the knowledge our students and your children have,” Lawrence ESC superintendent Joe Saunders said.

Awards were given to those who received excellent and superior ratings, as well as to those who were top in their categories.

Wood and Guy’s project, “The Psychology of Color” examined how color of packaging affects people’s preference when making choices.
Wood, 11, and in the sixth grade, said they tested whether people preferred a sandwich in a clear or colored bag, and between colors for lids on peanut butter and milk jugs.

She found that it did have an effect, with people preferring a clear bag for sandwiches and colored lids for milk and peanut butter.

“It feels good,” Wood said of her third place win with Guy, which she said was better than they expected. The two plan on competing at the district level, she said.

Davis took second place with his project “The Flatulence of Fruits,” in which he took a sample of a banana, an orange and a strawberry and place each in a test tube with a balloon attached.

As the fruits decayed, he measured the gases released by checking the balloon’s inflation. He said the strawberry released the most, due to the bacteria involved.

“I wasn’t expecting it,” Davis said of his win. “It felt great. When they called my name, my mouth dropped.

The fair’s top winner was Snyder, who achieved a perfect score from the judge’s.

“I created generators in three different stages and tested the most efficient one, with different coil wraps and magnets,” he said.

Following the district fair, the state science fair is set for May 13 at Ohio State University in Columbus.

Business focuses on blinds and curtains