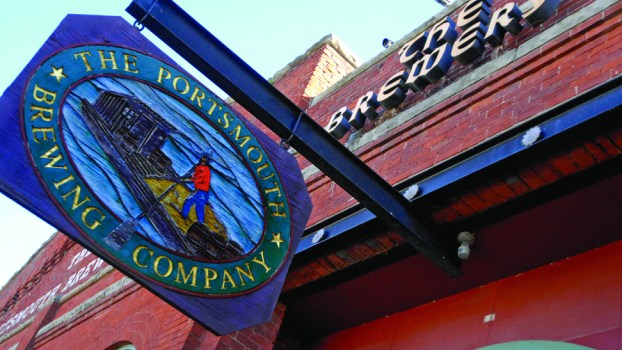 GREENUP, KENTUCKY — William Cullen’s book series on the breweries and brewers of Portsmouth didn’t actually start with beer. It started with a fascination with the historic buildings of Portsmouth’s Boneyfiddle district. After the Portsmouth Brewery closed during Prohibition, he explained, the building sat empty for a while until a car dealership located there. A number of other businesses were located in the structure over the years until the Mault family reopened the brewery there in 1995. But at one time there wasn’t ‘a’ brewery on Portsmouth’s west end of town. There were several. Up to five, according to Cullen, who has found references to the defunct industry not in other history books, but by combing through the records of old newspaper stories from across the region.

The Portsmouth Brewing Company, or Portsmouth Brewery as it was then called, was established in 1843 by German brewers Thomas Heinrich Muhlhauser and Jakob Schiele, and was originally located across the street according to photos and records Cullen has found. It didn’t move into the new building we know today until 1880. Fairly late, given that brewing in the Americas goes back to before the founding of the nation. However the red brick building does have the distinction, according to Cullen, of being the oldest standing brewery in the state of Ohio and the second oldest in the Midwest.

Brewing in that day and age was an essential industry. In the earliest days of our nation, beer was a part of most meals.

“Benjamin Franklin had beer for breakfast, lunch, and dinner,” Cullen said. “The idea was that strong beer made strong men.”

For Portsmouth’s large population of German immigrants, it was also a taste of home.

That idea of “strong beer” and “strong men” was soon to bump up against a new notion though; the growing temperance movement. Around the same time that the new building was being constructed, women were flexing their burgeoning political muscle and a growing religious fervor was spreading across the nation during the Third Great Awakening.

Though brewing was “one of the cornerstones of the community,” according to Cullen, especially among the German population, opposition to drunkenness and use of hard liquor lead to protests against saloon owners and their customers, and the breweries were dragged along in the conflict.

These anti-saloon leagues, often using colorful language like “salunatics” (a portmanteau of saloon and lunatic) to describe the behavior of drunken patrons and appeals to emotion to decry the abuse of alcoholic husbands toward their families were able to shut down brewing in Ohio as early as 1908, when Ohio passed a law allowing local communities to choose whether they would allow alcohol to be produced and sold locally. This was when many of the breweries, including major brand manufacturers like Budweiser and Pabst, shuttered their breweries in Portsmouth.

“Pabst had a brewery just there on the other side of the flood wall,” Cullen explained, right next door to the Portsmouth Brewery. In fact the stone stable that is still standing there may have once been used to house the horses that hauled beer by wagon to local customers.

Others tried to switch to soft drinks, or found other ways around the bans. In 1909 Paul Esselborn, proprietor of the Portsmouth Brewing and Ice Company, was found guilty of brewing beer in Portsmouth despite the local ban. Esselborn, who inherited control of the company from his father Julius in 1900, was accused of shipping his Portsmouth made brew to Catlettsburg,

Kentucky and them importing it back into Ohio as a Kentucky made beer. Though it may or may not have been true, the judge in the case, Judge Blair, was biased on the side of the temperance movement, according to Cullen, and any brewing that may have been ongoing at the location ceased until the local ban was lifted in 1911.

The return to brewing wasn’t to last long. By 1918 Ohio was leading the Prohibition cause, and after the passage of national Prohibition in 1919 the brewery operated for one more year until ceasing production in 1920 in compliance with the federal ban.

Though Prohibition wasn’t to last, as a younger generation of women and the soldiers returning from WWI ignored the law to find distraction in speakeasies and it became obvious to even the most ardent of temperance supporters that the law was doing more harm than good as organized crime gained a considerable foothold in the once legal market, the law did have a lasting impact on local brewing across the country.

Portsmouth, like most other communities, didn’t see an immediate return of their local brewers. Instead large commercial brewers came to dominate the market for the next several decades, until the craft brewing resurgence of the late 20th century.

It’s this era that Cullen hopes to explore in his next book, which covers the 20th and 21st centuries, including the period leading up to Prohibition and the return of local brews beginning in 1996 with the Mault family re-establishing the practice at the Portsmouth Brewing Company.

“A History of Brewers in Portsmouth, Ohio, Part One: The 19th Century” is available in local bookstores or from the publisher Xlibris, by visiting their website at xlibris.com or calling at 1-888-795-4274.

Cullen is currently working on Part Two, and hopes to have it available soon.

Two authors will be signing books and even giving away a bag of books this weekend. Authors Dr. MJ Wixsom,... read more