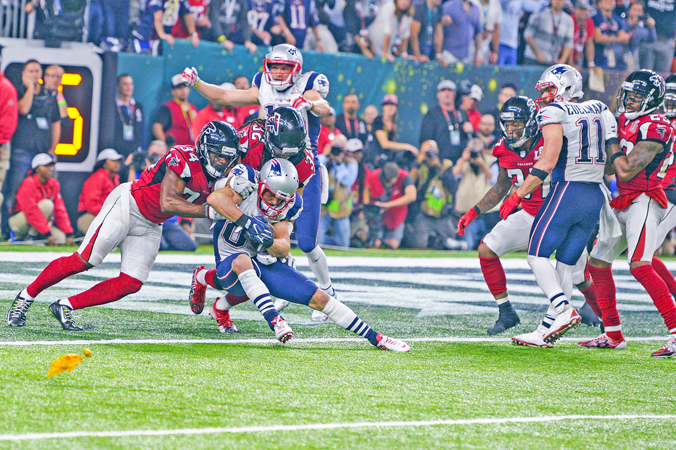 ATLANTA (AP) — Well, Atlanta, there’s nothing left to say.
The city once known as “Loserville” was cruising toward its first Super Bowl championship, leading Tom Brady and the mighty New England Patriots by 25 points.
TWENTY-FIVE!
Back in Atlanta, the city was all ready to bust loose in a celebration like no other, seemingly assured of finally putting to rest its history of sports flops.
Then, it happened.
The greatest flop of them all.
This one will take a long, long time to get over.
Brady engineered a stunning comeback, guiding the Patriots to a pair of touchdowns and a pair of 2-point conversions that sent the Super Bowl to overtime for the first time.
At that point, it was a mere formality.
The Patriots won the coin toss.
Of course.
The Patriots drove right down the field for the championship-winning touchdown.
Of course.
The final: New England 34, Atlanta 28.
This one will go down as one of the greatest title games in NFL history.
That’s little consolation to Atlanta.
In the A-T-L, this will join the Braves blowing a 6-0 lead in Game 4 of the 1996 World Series, the Hawks squandering a chance to eliminate Larry Bird and the Boston Celtics in the 1988 NBA playoffs, Danny White leading the Dallas Cowboys back from 10 points down in the fourth quarter to beat the Falcons in a 1981 playoff game.
But, really, nothing comes close to this level of sporting disappointment.
The Falcons spent 2 1/2 quarters playing with the swagger and confidence of a team that wasn’t the least bit concerned about their city’s history.
Even in the closing minutes, after the Patriots made a game of it, Atlanta was in position to put the victory away when Julio Jones made a stunning catch along the sideline, going to rip the ball away from a defender and somehow getting both feet down before tumbling out of bounds at the New England 22.
With under 5 minutes remaining and the Falcons still up 28-20, all they needed to do was run three more plays and set up for a field goal by Pro Bowl kicker Matt Bryant that would finally put the Patriots away.
Devonta Freeman was thrown for a 1-yard loss, but that was OK.
But then, instead of another run, Ryan dropped back to pass.
He was thrown for a 12-yard loss and, just like that, the Falcons were on the fringe of Bryant’s range.
Any hope for a field goal was lost when Jake Matthews was called for a holding penalty that set Atlanta back another 10 yards.
Ryan followed with an incomplete pass, and the Falcons were forced to punt it back to Brady and a Patriots team that was suddenly brimming with bravado.
It wasn’t the least bit shocking when they marched right down the field, 91 yards, for James White’s short touchdown run.
It wasn’t the least bit shocking when Brady hooked up with Danny Amendola on a 2-point pass that tied the game with 57 seconds remaining.
It wasn’t the least bit shocking when the Falcons, without any timeouts, failed to muster anything on their final offensive possession.
It wasn’t the least bit shocking when the Patriots won the toss and drove down the field one more time, 75 yards in just eight plays, and finished off the Falcons with a 2-yard touchdown run.
The city of Atlanta had seen it all before.
———
Follow Paul Newberry on Twitter at www.twitter.com/pnewberry1963 . His work can be found at http://bigstory.ap.org/content/paul-newberry .
———
For more NFL coverage: www.pro32.ap.org and www.twitter.com/AP—NFL