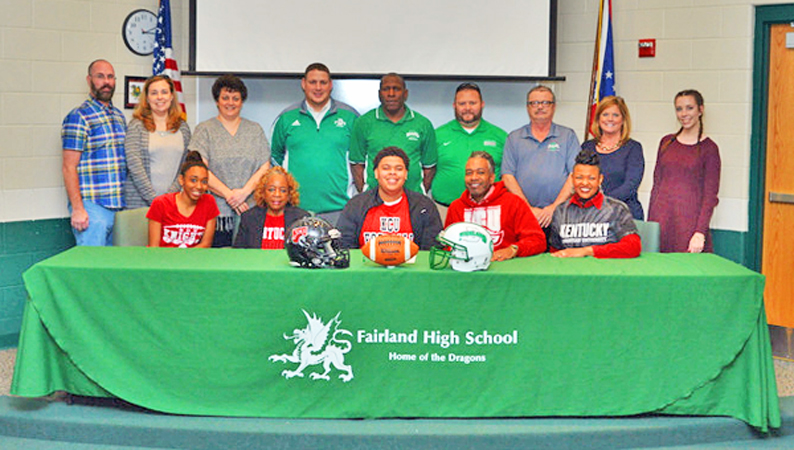 PROCTORVILLE — Michael Tubbs now understands how a quarterback feels when Tubbs gets a blindside sack.
Tubbs was in love with another sport until he was suddenly struck with a new activity that consumed his attention.
“At first it was baseball. Then it was like I just got hit. Football is what I love to do. I learned to love the game,” said Tubbs who was a first baseman and played the sport up until his junior year.
The new love of football will continue another four years after Tubbs signed a letter-of-intent on Wednesday to play for the Kentucky Christian University Knights.
The 6-foot, 300-pound Tubbs played on the offensive and defensive lines for Fairland but said the KCU coaches plan to use him at defensive end or nose guard.
“They plan to switch me between those two positions and on special teams,” said Tubbs.
Fairland was 3-7 last season it didn’t stop the interest in Tubbs.
“I didn’t have my greatest season, but I got what I wanted — a chance to play college ball. I get to play what I love to do,” said Tubbs.
KCU named Corey Fipps the Knights head coach on Wednesday. Fipps had been the offensive coordinator at NCAA Division II Missouri Southern State the past two seasons.
Tubbs wasn’t concerned who was going to be the coach.
“Whoever it is I’ll do what they want. Whoever it is you just have to adjust to what is expected,” said Tubbs.
Although the college coach isn’t a major concern, Tubbs’ high school coach the past two seasons Melvin Cunningham had a major affect on him.
“He’s probably the best coach I’ve had since little league,” said Tubbs. “He knew what I needed to work on to get better. Even though I have good parents, he (also) told me right from wrong.”
Tubbs said he picked KCU over others schools such as Marietta, Alderson-Broaddus and Geneva, Pa.
“It’s very convenient. I didn’t want to get too far from home that I couldn’t do the things I need to do,” said Tubbs. “The classes as small which is good for me. The teachers will know me.”
The son of Melissa and Michael Tubbs Sr., Michael plans to major in sports management.
Kentucky Christian opens its season on Thursday, Aug. 31, at Morehead State, a Division I-A non-scholarship school.