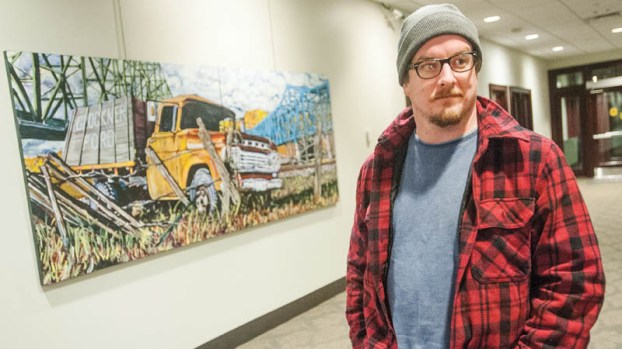 Portsmouth artist Joey Shannon at his opening show at the Proctorville Center.

PROCTORVILLE — A new art exhibit at Ohio University Southern’s Proctorville center is making full use of the facility’s wall space.

A reception took place on Thursday, to mark the start of an exhibit of paintings by Portsmouth artist Joey Shannon, which will remain up through the semester.

Shannon’s large paintings grace the halls of the building, featuring subject matter from portraits to commissions he did for Glockner South Point Ford.

He said all of the large-scale works are acrylic, painted in one color at a time.

“I like doing those the best,” Shannon said, noting that he has painted figures such as Ray Charles, or, in the case of an elderly man in the exhibit “someone no one recognizes.”

He said Glockner gave him ideas for his commissions, which featured automobiles, and then he went from there. Some are comprised of two canvasses and feature local landmarks like the Ashland bridges.

Shannon said he took his first painting class during his freshman year at Otterbein University in Columbus in 2000 and “fell in love with it.” He went on to the Creative Circus, a two-year portfolio school in Atlanta, Georgia, where he studied graphic design and advertising.

Gary Tillis, a longtime art instructor with Ohio University Southern, said the works were a great fit for the building.

“We run an exhibit each semester and we exhibit works at both our Ironton and Proctorville locations,” he said. “The reason we brought Joey Shannon’s work here is because of the size and it fits nicely. We have lots of wall space here and we knew we could put his 10-foot paintings on display. These are by far the biggest works we’ve had in over 10 years of doing this.”

The OUS Proctorville Center is located at 111 Private Drive 516.

For more photos from the exhibit, see Sunday’s focus page.

SOUTH POINT — Loan Central celebrated the grand reopening of their South Point office on Jan. 25. “The Ironton and... read more