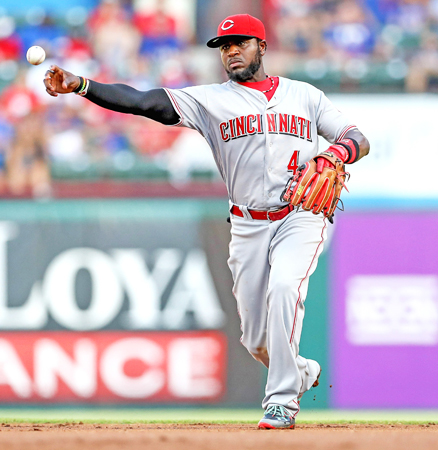 CINCINNATI — Cincinnati Reds President of Baseball Operations, General Manager Dick Williams announced Sunday the acquisitions of left-handed pitcher Andrew McKirahan and right-handed pitcher Carlos Portuondo from the Atlanta Braves in exchange for second baseman Brandon Phillips.
“We appreciate Brandon’s contributions to our organization,” Williams said.
“He excited our fan base and was an important part of several seasons of winning Reds baseball. We wish him well with this next opportunity.”
Phillips, a 35-year-old second baseman who has repeatedly blocked trades, is signed through the 2017 season.
He had a full no-trade clause, having at least 10 years of playing experience including five with his current team. After being traded to the Braves, his contract reverts to a partial no-trade clause, which lists 12 teams to which he cannot be traded.
“It should be noted that we never included no-trade or limited-trade provisions for players such as Hall of Famers Greg Maddux, Tom Glavine and John Smoltz, as well as future Hall of Famers Chipper Jones, Fred McGriff and Andruw Jones, and we have no intention to include these provisions in the future,” Coppolella said.
Phillips has a .275 batting average with 334 doubles and 197 home runs in his 15 seasons in the majors. He is only 137 hits shy of 2,000 for his career.
Braves general manager John Coppolella calls Phillips a “Gold Glove-caliber defender” whom he hopes will add depth to the team’s offensive lineup.
Phillips graduated from Redan High School in Stone Mountain, Georgia, in 1999. He was drafted in the second round by the Montreal Expos. His debut came with the Cleveland Indians in 2002.
McKirahan, 27, has posted a sterling 2.20 ERA in 96 career minor league appearances. He pitched in 27 games for the Braves in 2015 but missed the entire 2016 season recovering from “Tommy John” surgery to repair the torn ulnar collateral ligament in his left elbow.
Portuondo, 29, was signed by the Braves in February 2016 as an international free agent from Cuba. He spent last season in the minor leagues pitching for Atlanta’s Class A affiliate at Carolina and Class AAA club at Gwinnett.