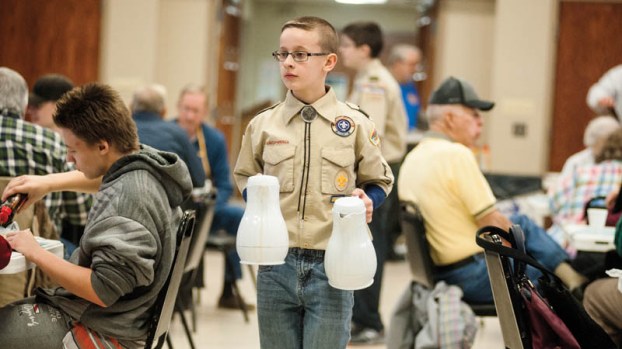 The community turned out strong on Saturday morning to support the Ironton Rotary Club, and have a delicious pancake and sausage breakfast.

The Ironton Rotary Club has been hosting its pancake breakfast fundraiser for over 40 years now. Though he said he “can’t recall” exactly when it started, Dr. Dick Thompson said he thinks the pancake breakfasts started around 1975. He does remember it was in full swing by 1978, however, because despite the blizzard that winter, they still packed their breakfast.

“I guess it was hot coffee, pancakes, and that they’ve always supported Rotary,” he explained when asked what would draw the community out even in that harsh weather.

Thompson, the club’s longest serving member with 45 years, has been a member of the Ironton Rotary Club since 1972. Even after moving to Columbus to practice, the chiropractor explained, he still found himself back down in Ironton regularly enough that he decided to continue attending meetings and participating here.

Greg Ervin, Rotary’s southeastern Ohio assistant district governor, explained while serving up pancakes that the breakfast is one of Ironton’s chief fundraisers, and helps pay for everything from scholarships to parades.

“The Rotary Club of Ironton’s pancake breakfast is one of their chief fundraisers, and they use the proceeds from what they make at the pancake sale for scholarships and other community projects,” Ervin said. “One of their big projects is a nursing scholarship.”

Ironton Rotary President Dan Evans elaborated, explaining that in addition to two nursing scholarships, other projects funded by the Rotary club through their fundraisers include the annual Halloween parade and a program to provide a dictionary to every third grader in the county.

“We also try to support local projects that have a significant benefit to the community,” Evans said.

It’s exactly this kind of community service that the Boy Scouts of America want their young men to model, said Eric Davis, assistant scoutmaster for Troop 103, in Coal Grove, who have assisted for several years now with the pancake breakfast.

“We work with the Rotary here in Ironton. We work with the Lions Club back in Coal Grove, which is where our troop is. Both service organizations,” Davis said, “(are) good examples for the boys.”

A project that began last August saw completion today with the dedication of Don and Sally Richendollar’s new home in... read more