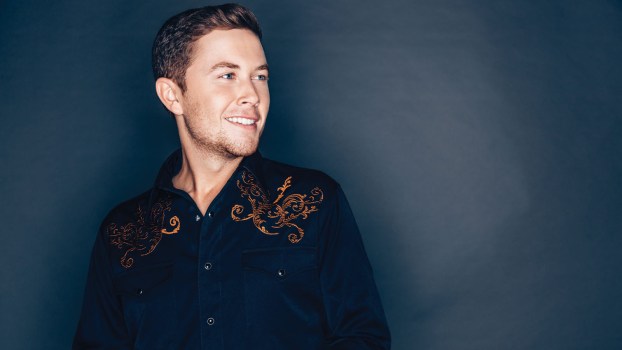 Submitted photo: Scotty McCreery will perform at the Paramount Arts Center in Ashland on Saturday.

McCreery to perform at PAC

Scotty McCreery is set to perform at the Paramount Arts Center on Saturday, Feb. 18.

As the American Idol champion from 2011, he has scored chart- topping success early in his career, with two No. 1 country albums and a No. 2 Christmas album. His debut single, “I Love You this Big,” reached No. 11 on the Billboard top 100 and made the country top 20.

McCreery, 23, said he’s had “a really fun year” playing live and said his show will bring a mix of his own hits and cover tunes.

“We play the obvious songs, but we like try out a couple of other things,” he said. “We have a get idea of what the fans like.”

He said he counts traditional artists such as Charlie Daniels, Merle Haggard, George Jones and recent hitmakers like Brad Paisley among his influences.

McCreery spoke with The Tribune on Wednesday, just before he got a chance to pay tribute to one his inspirations at the “Heroes and Friends: A Tribute to Randy Travis” event at the Bridgestone Arena in Nashville, alongside Alabama, Kane Brown, Joe Nichols, Kenny Rogers, Travis Tritt, Josh Turner and others.

“He’s a tremendous influence on me,” McCreery said of his fellow home state resident, whose career has been sidelined as he recovers from a 2013 stroke. “I’m from North Carolina, and he’s country music royalty where I come from. I’m excited to get the chance to perform.”

He said for the show, he was planning to reach back to Travis’ 1985 debut album to cover his second single ‘1982.’

“I like to say that music is timeless,” he said of the song, recorded eight years before he was born.

McCreery recently received a surprise visit to his bus from Travis and his family, following a performance Fort Worth, Texas. He had performed a cover of Travis’ “Forever and Ever” during the concert.

He said he credits ‘Idol” for helping him launch his career.

“It’ been a big jumpstart for sure,” he said, stating his plan was to try to break into the industry while in college. “I’m thankful for the opportunity I’ve been given. There’s an insane amount of talent here in Nashville on the street that no one’s heard, because of the luck of the draw.”

As for the future, he said he wants to stay within the genre of country.

“It’s what I grew out of and enjoy he said,” he said. “I’ll try some things new, but it all comes back to who I am and will be a mix of the old school and the new school.”

Tickets for McCreery’s performance range from $64-$38 and can be purchased at the Paramount’s box office, by calling 606-324-0007, or visiting www.paramountartscenter.com.

Narcan costs rising With the rise of heroin overdoses, both locally and nationally, emergency services are facing a budget crunch... read more