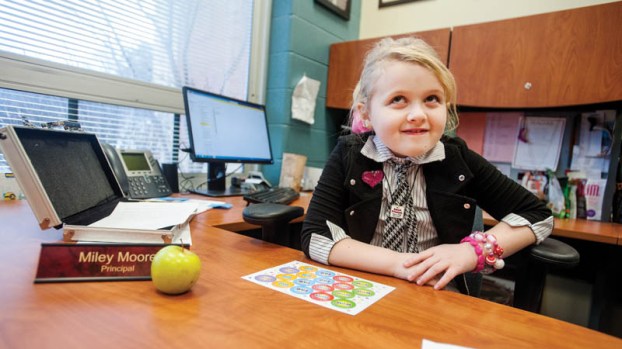 Miley Moore is principal for a day at Dawson-Bryant Elementary School. She extended recess and allowed the teachers to go home early.

Who runs the school? Kids do, for a day

Miley Moore’s first acts as principal of Dawson-Bryant Elementary made her pretty popular. She gave all the students five extra minutes of recess, and let the teachers leave a half hour early.

“They probably won’t want me to come back,” joked Angie LaFon, Dawson-Bryant’s principal on every other day of the year.

Miley said that she wanted to be principal, “because I want to be in charge of everybody.”

But even though she enjoyed being in charge of everyone, she’d rather grow up to be a veterinarian. Two of her friends want to be teachers, she said, but it was “too much work” for her.

She did put a lot of work into her new role. She prepared her announcements and set a list of priorities, including the extra recess time, the night before. She also prepared treats that she placed in each of the teacher’s mailboxes. She also had to arrive at school 30 minutes early, she said, to help with bus duty.

Moore was serving as principal-for-a-day at the elementary after her grandfather won an auction at the Fall Festival for the role.

LaFon explained that the PTO started auctioning off roles in the school as part of the Fall Festival fundraiser last year, and the activity proved instantly popular.

“Our PTO sponsors our Fall Festival every year,” LaFon said. “An auction is the way we made money during the Fall Festival. The rest of it is games for the kids, but that’s not the money part.

(For) the auction community members and businesses donate items, and then we just came up with a few of our own to add to it.”

Last year, it was fun, she said. But this year the kids were really looking forward to it and it did very well as a fundraiser.

“Now that the kids, they know about it, they get excited for it,” LaFon said. “They’re in character, they take it seriously, they’re well prepared, every one of them. I sent out a letter a couple weeks before that prepares them for the day… outlining what the day is going to look like for them, and they come prepared.

She had her announcements ready, we knew that was something they could do. I told her to come up with a list of things she wanted to accomplish for the day, so she came up with that for me, and she dressed the part and was ready to go. Brought her briefcase and came in professional, so I’m really proud of how seriously they take it. This isn’t all fun and games. They want to see what a day in the life of the principal and the teachers is like.”

Altogether, she said, the Fall Festival raised around $6,000 and “the majority of that was the auction.”

The community turned out strong on Saturday morning to support the Ironton Rotary Club, and have a delicious pancake and... read more