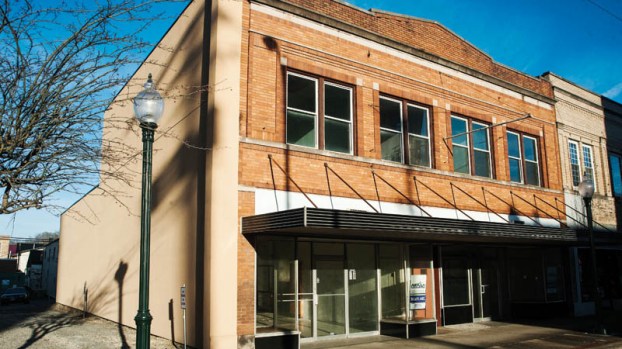 Former pharmacy location has much to offer

Empty store fronts are something that no town likes to see. But for the right business, its an opportunity to get a prime spot.

Ironton has about a dozen buildings that need an occupant, including the former Staley Pharmacy building on South Third Street in downtown Ironton.

Sam Heighton is the executive director of Ironton aLive, an organization dedicated to bringing commercial development to Ironton.

He said the building dates back to the early 1900s.

“It was built as a pharmacy by the Staley family,” he said. That is clear from not only the giant sign that says “pharmacy” but by the rooms of shelves that go from floor to ceiling that once held the business’ inventory.

In 2013, Fruth Pharmacy merged with Staley’s and took over the location. In November 2014, there was a fire in the building next door.

“Fruth had to move out because they lost all their utilities and they decided to not move back in,” Heighton said. He added the fire damage to the Staley building was minimal and has been repaired.

The next-door building suffered extensive damage and was demolished. The same owner now owns both pieces of property.

“He would sell both pieces as one piece of property,” Heighton said. That creates a rare thing in downtown Ironton. “So, there is not another building in downtown that I know of that has a parking lot with it.”

“You could even install a drive-thru window if you wanted to,” he added. “There are a lot of options in this building.”

The combined fronts of the property are 40 feet. The Staley building’s commercial space is big.

One of the leftover features is a built-in phone booth. The phone is long gone.

“You could make people go in there if they want to talk on their cell phones,” Heighton said with a laugh.

Due to moisture, paint from the old tin ceiling panels is flaking off.

“You could get a guy to repaint that with a paint gun in a day,” Heighton said.

The roof was reinforced with angled steel after the fire to make it stronger.

“The building has passed inspection as a safe building,” he said.

Heighton said the advantage of the building is its downtown location and that it is across from the Brumberg Building. There has been talk for years about renovating the building to accommodate a store on the first floor and several apartments on the upper floors.

“It looks like, right now, there are things in place to get something started,” he said.

The Staley building also has apartments on its second floor, which could be renovated for rentals.

“We’re trying to get people to live downtown in the upper floors,” Heighton said. “That’s been one of my projects for the past five years.”

Heighton said he isn’t involved in selling the building but it is one among many that he points out to prospective new businesses.

“We’re already seeing an increase in traffic since it opened,” he said. “We think the downtown is the key to retail in our city. And we want to keep it going.”

UPPER TOWNSHIP — It was a packed house at the Upper Township Fire Department for the chili cookoff fundraiser on... read more