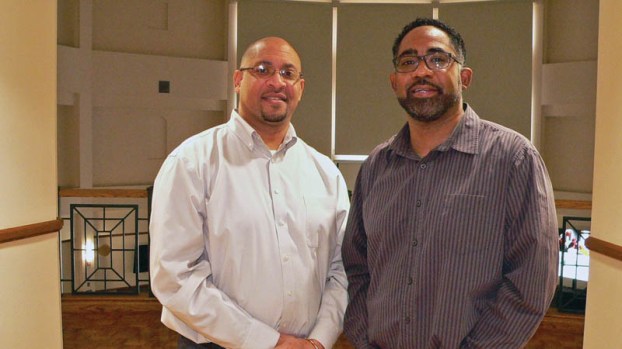 Brothers Robert Pleasant (left) and Craig Pleasant will celebrate that it has been 15 years since Robert donated a kidney to Craig in March of 2002. While many family members offered to donate a kidney, Robert was the best match because they are siblings.

Next month marks an important anniversary for brothers Robert and Craig Pleasant.

It was 15 years ago that Robert donated one of his kidneys to his younger brother, Craig.

Robert is the coordinator of Student Success Center and College Credit Plus and Coordinator of Diversity and Inclusion at Ohio University Southern. Craig is the Veterans Services coordinator at Ashland Community and Technical College. Craig didn’t know anything was seriously wrong with him on Thanksgiving 2001. He had some symptoms but ignored feelings of nausea, headaches and frequent urination.

“I thought it was the flu or something,” he said.

But the Monday after the holiday break, he went to work and got so sick he had to leave early. He didn’t feel better so he went to the emergency room.

“They drew my blood several times and discovered that my kidneys had stopped working,” he said. Robert said the whole family was very concerned.

“The doctors told us that if it had been any longer, Craig wouldn’t have made it,” he said. “It was a tough time.”

Within the week, Craig started doing hemodialysis, where the blood came out of a port in his chest into a machine that filtered out waste product and water from his blood and then the blood was put back into him. He lost about 60 pounds and his appetite. He went on temporary disability from his job at the Ohio River Valley Correctional Facility.

He consulted with doctors and nurses to find out what his options were.

“It was either dialysis or a kidney transplant,” he said.

Once the transplant option was decided on, Craig chose The Ohio State University Wexner Medical Center in Columbus.

Then began the process of who would be the best candidate to donate a kidney. Robert said there was no shortage of family members offering to take the test to see if they were a good match to donate a kidney to Craig.

“A lot of the family, even cousins, volunteered to be tested,” Robert said. “But they began with me.”

“Robert was the first one to get tested and he actually matched with me,” Craig said. “It was a blessing. At the time, the waiting list was something like five years. I was fortunate enough to find one in a few months.”

“They say siblings are the best match a lot of times when it comes to things like this,” Robert said. “So, there wasn’t even a question of whether I was going to do it or not. Of course I was.”

After passing tests to see if both of Robert’s kidneys were functioning ok and had good output, the transplant surgery was scheduled for March 29, 2002.

The life expectancy for someone after getting a new kidney is an additional 15 to 20 years than if they had stayed on just dialysis.

“I’m doing well,” Craig said. “I do blood work every month to monitor where I’m at. I go up to Ohio State for a yearly check up. It’s good so far. I take my medicine; I try to watch what I eat.

Other than that, I can live the life I did before. So, 15 years, it’s been a blessing.”

Craig said that getting a new kidney was just treating his condition.

“I’m not technically cured,” he said. “But this enables me to live a better quality of life, let me continue to do what I have been doing. No more tackle football though. I tried playing flag football but I had to give all that up.”

Robert said that he has no ill effects from the surgery.

Soon after the surgery, Robert and Craig became ambassadors with Lifeline of Ohio, a non-profit group that encourages people to donate organs and coordinates donations. They’ve spoken at schools, the Ohio Department of Motor Vehicles, and other places about the group.

According to Lifeline, there are 118,478 people across the nation waiting for an organ transplant; there are over 3,000 Ohioans on the waiting list. Nearly 60 percent Ohioans are registered as organ, eye and tissue donors and 54 percent of Lawrence County citizens have registered to be an organ donor.

Part of the Pleasants’s work as ambassadors is dispelling misconceptions, like doctors won’t work to save your life if you are an organ donor.

“That is so far from the truth,” Robert said. “The doctors take an oath and they will do everything possible to save someone’s life.”

He added that one posthumous donation of organs means saving the life of up to eight people.

“Having that knowledge is important,” Robert said.

“It’s done in an ethical way,” Craig said. “And you can register at the DMV when you renew your license.”

You can register online in the Ohio Donor Registry through www.lifelineofohio.org, or when renewing a driver’s license, or by completing a Donor Registry Enrollment Form available by calling 800-525-5667.

Former pharmacy location has much to offer Empty store fronts are something that no town likes to see. But for... read more