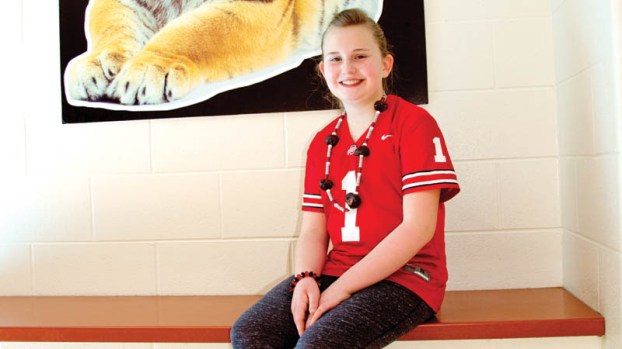 An Ironton Elementary fifth grader is on her way to the regional Scripps National Spelling Bee, where she will represent Lawrence County’s schools in the event.

Danielle Leonard, 11, will compete in the March 18 bee, which takes place at Ohio University in Athens.

As the winner of her school’s bee, Leonard took part in the county bee, conducted on Dec. 8 and sponsored by the Lawrence County Educational Services Center.

She came in second in that event, behind Rock Hill Middle School’s Karlie Fleeman.

She lost on the word “bravura.”

“I can spell it now,” Leonard said, reciting it perfectly.

Spelling champions from individual schools are eligible to take an online test to qualify for the regional competition.

Leonard was the only student from Lawrence County to make the cut, after scores were tabulated earlier this month.

“It feels very great,” she said of getting the chance to compete. “I’ve had a lot of help from family, especially my mother. She helped me with studying for hours.”

Her parents are Missy and Ron Leonard, of Ironton. Her grandfather, Tommy Tipton, is a familiar name to many in the area, having run Tipton’s Bakery.

“It’s a family business,” Leonard says of the bakery, which is now run by her aunt. “It’s been passed down through the generations.”

When she is not taking part in the spelling bee, Leonard says she likes to do a lot of reading.

“And I love swimming,” she said.

She said she has been hard at work preparing for the upcoming bee.

“I’ve been going over all the long lists of words, the different languages,” she said. “Stuff like that.”

As a fifth grader, this is her second year of eligibility for the bee, which is open to fourth through eighth grades.

From the regional bee, winners go on to qualify for Scripps National Bee, held Washington D.C. later this spring.

The last student from Lawrence County to qualify for the national bee was Felicity Jenkins, a 2016 graduate of Symmes Valley High School, who took part in spelling bees in elementary and middle school and was a five-time county champion.

As the lone student representing the county this year, Leonard said she is little nervous, but she is optimistic about her prospects at the regional bee as a result of her studying.