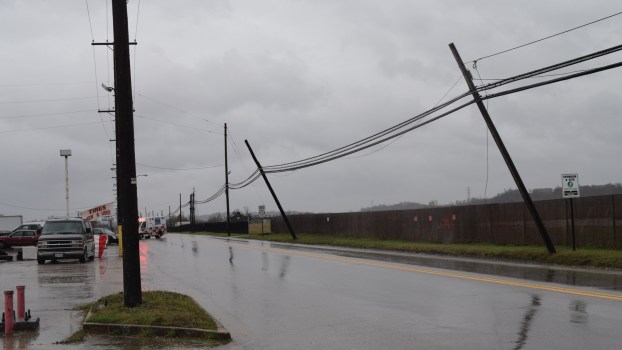 The line of storms, with hail and wind gusts in excess of 50 mph, moved into Ironton at about 9 a.m.

“There are poles down from S. Third Street from about the 2500 block of Lorain Street all the way up to Desco (Federal Credit Union),” Ironton Police Chief Joe Ross said. “We’ve got about 25-30 telephone poles laying in the middle of Third Street.”

In addition to those down, several others were leaning over the roadway, closing traffic as far east as the intersection with Marion Pike at the border with Coal Grove. By afternoon, S. Third Street was open to the intersection of Commerce Drive.

Responders with Patriot EMS, who were manning the closed intersection, said the measure was a precaution, in case the weight brought more poles down.

Ross said crews were on the scene.

“What happened is there were a couple that fell and it was like dominoes, it took a whole three city blocks with it,” Ross said. “So it’s a mess up there right now. We got fire and other emergency services down there.”

The downed poles closed streets and caused power outages to many in the city, with AEP reporting more than 90 people without electricity. More than 18,000 were without power across Ohio.

Ironton Mayor Katrina Keith said, outside of the situation on Third Street, the city had experienced no major damage.

“I was checking for reports of flooding, but we have none,” Keith said. “The only real damage we have is up there where the poles are down.”

In Ashland, power outages had disabled traffic lights downtown on Winchester and Greenup Avenues. The Ashland Town Center mall, where a utility pole fell on the JC Penney building and a gas line was ruptured, was evacuated and Central Park, where several tree branches came down, was closed.

AEP said about 5,000 customers in Boyd County were without power.

In South Point, Mayor Jeff Gaskin said no major damage had been reported.

“We were very fortunate that we didn’t get as much rain as everyone else,” Gaskin said, noting that officials had prepared for the storm to minimize flooding. “We checked every storm drain before, to make sure they were open.”

In Proctorville, Police Chief Bill Murphy said that no major damage had been reported as of noon.

As a result of the heavy rains, the National Weather Service, located in Charleston West Virginia, issued a flash flood warning, in effect until 7 p.m. Thursday night.

While the storms were severe in Lawrence County, they were not as intense as other parts of Ohio. Tornado warnings were issued for Scioto, Meigs and Athens counties, when conditions on radar indicated a funnel cloud had likely formed.

The Ohio Department of Transportation said Wednesday morning the following locations in Lawrence County were under restriction.