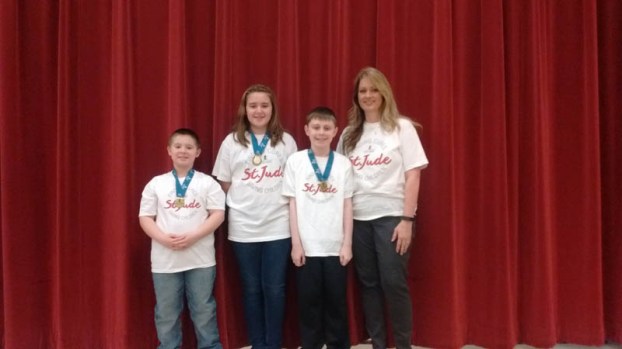 The kids reached out to friends, family, church groups, and even used the power of the internet and social media to not only meet, but to nearly double their original goal of $1,500, bringing in a total of $2,600 for the organization founded by Lebanese-American actor and comedian Danny Thomas.

The Math-A-Thon challenged kids to raise donations, rewarding those who participated with a “funbook” filled with math problems that the students could complete. But although Wagner’s kids really enjoy their math, most said it was a desire to help other kids battling cancer that motivated them.

“We got involved because we wanted to help people who aren’t as fortunate as us,” explained Lily Schneider, who was one of the top fundraisers, bringing in $200 for the charity. “And, we like math.”

Unlike many other marathon charity events, where individuals solicit donations based on the number of books they read or problems they complete, the St. Jude Math-A-Thon simply challenges folks to donate what they can afford, at a flat level.

“They don’t do per-problem,” Wagner explained. “They just go out and get donations, whatever anybody wants to donate, and just try to get the most amount that they can. Then when they collect all their donations they bring that back in and they get a math funbook. Then they complete that and turn that back in.”

“I just felt bad because they might not get to do some of the things that we get to do,” said student Veronica Poyner, “and maybe (raising money) would help them to be able to do some of that if we did this.”

“I wanted to help the children out because I felt bad for them, because they couldn’t do the things we could do,” Hamm said.

“I wanted to do it because, they might not turn out like this,” added Keegan Schultz. “Once they get a certain age, they can’t do all the things we can do. They might not be able to play sports or (their school work might suffer).”

Wagner explained that the kids watched videos from children who are patients at St. Jude, and that it made big impact on them.

“I showed them videos each day of actual cancer patients,” Wagner said. “So they actually got to meet some of the children that were in the hospital, and that helped them relate.”

“Some of the kids in our class were crying after the video,” Schneider said.

All 40 of the students who participated were awarded with the math funbook to complete. Students who utilized the online resources for fundraising were also awarded with a St. Jude’s themed medal.