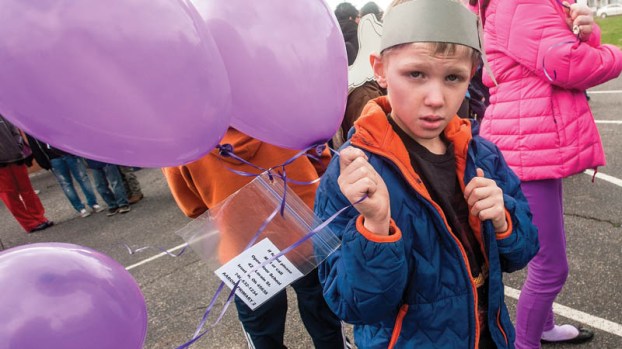 Up, up and away for DD awareness month

Despite a cold chill, the students of Open Doors happily let their balloons go into the sky as part of the school’s kick-off for National Developmental Disabilities Month celebration.
“We were supposed to have it (on Wednesday) but obviously, there was a huge storm in Ironton, so that defeated the purpose,” said Open Door principal Kendra Heim. Instead, the balloon launch was rescheduled for Thursday. It was cold but the light wind made the balloons take off quickly in a northeasterly direction.
Mixed in the crowd of kids, teachers and helpers was a Cat in the Hat and kids with Horton Hears A Who elephant ears.
“We were having Dr. Seuss Day for his birthday so we added that into our activities,” Heim explained. “The kids really like this. Anything they get to do that is a little different, they really enjoy it. We have some new kids and they were really looking forward to it. They all like to see the balloons fly away.”
All 67 students from kindergarten to 12th grade participated.
“We probably set off 70 balloons or so,” Heim said. “We had all purple and white balloons ready on Tuesday but they deflated overnight so we had to do them again. So we had a couple extra colors in there.”
Each balloon had little tags with the school’s name and address, the name of a student and a request that if the balloon is found, to drop a note to tell the student where it was found.
“We’ve gotten several from Pennsylvania, New York, New Jersey, Virginia,” Heim said. “I think we got one from Georgia once. It just depends which way the wind is blowing.”
Heim said that the school has been doing the balloon launch for more years than she can remember.
“When they started it, they wanted some kind of kickoff,” she said. “I know the Chili Fest has been going on for 18 years and I think the balloon launch has been going on for every bit that long, if not longer.”
Besides the balloons and Dr. Seuss day, other activities for National Development Disabilities Month include a March Madness game on March 21, where current Open Door students compete against graduates, and an adult game where adult clients take on members of The Tribune. They also have their annual Chili Fest and craft show on March 25 and on March 30, they have their big basketball game against students from the Vern Riffe School in Portsmouth.
Open Doors personnel director Tim Nunnery is also going to area middle schools and giving a presentation on what it’s like to live with a disability.
The whole event began in 1987 after President Ronald Reagan made March National Development Disabilities Month.
“I urge all Americans to join me in according to our fellow citizens with such disabilities both encouragement and the opportunities they need to lead productive lives and to achieve their full potential,” Reagan wrote in the proclamation.

Annual celebration based around birthday of Dr. Seuss Schools in Lawrence County have been celebrating Read Across America Week. The... read more