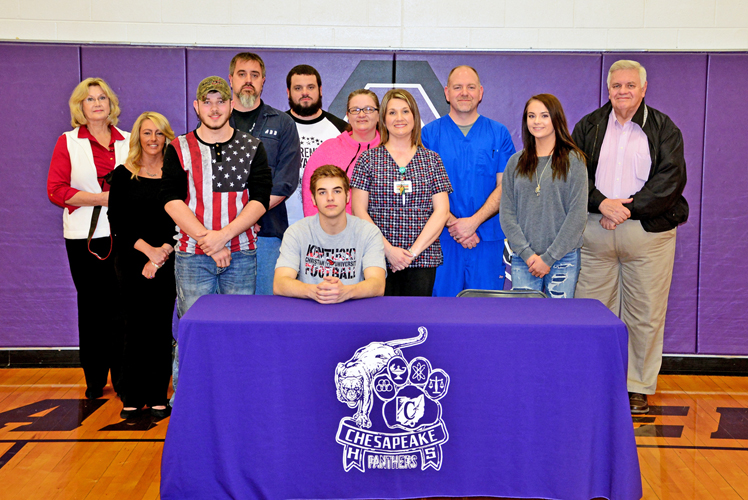 CHESAPEAKE — The nursing program brought Matt Burns to the football program.
The Chesapeake Panthers’ senior two-way end was looking at college options in nursing when the opportunity to continue his football career jumped to the surface.
Kentucky Christian University had a nursing program and by chance Burns got hooked up with the football program and he will take advantage of both after signing a letter-of-intent with the Knights on Monday.
“There weren’t any other schools I went to visit,” said Burns who initially was head to the nursing program at Ohio University Southern in Ironton.
“I’ve always wanted to play college football and I went and clicked on their (web) site and they had this thing that said ‘recruit me.’ So I filled out the (form) and I was texting the enrollment counselor and I sent her all my information and she sent it to the (football) coaches and she said they wanted to make me an offer.”
The offer came and Burns snatched up the opportunity.
“I’m glad that Matthew is going to get a chance to play at the next level. That’s something that he’s wanting to do. That’s not something that everyone gets a chance to do. If he’s willing to put in the work to do it, then I wish him the best. I hope to see him do well,” said Panthers’ coach Andy Clark.
“More important to get a chance to go to school at a place that has the program that he wants and have a chance to come out of there with a degree and he can move on. Football is an avenue to help you stay there and do that.”
The 6-foot-3,180-pound Burns said he intends to add 20 pounds to his frame before arriving on the KCU campus.
“The coaches said they are looking at both D-line and tight end and wide out for me. I talked to the offensive coaches and they said they’d have me playing tight end some and wide out some,” said Burns.
Even though Burns will be studying anatomy wearing scrubs off the field, he is excited about the chance to play college football.
“Their program was pretty amazing. I enjoyed talking to all the coaches and talking to (head coach Corey) Fipps,” said Burns.
“As of right now they just told me to work my butt off in practice and try to be on special teams my freshman year and then just keep working and working and showing them what I can do.
“I’m a little nervous to play at that level. It’s going to be a mental block I’m going to have to get over. The way I see it right now is the only person that’s really going to stop me is myself.”
KCU has a King’s Daughters’ Hospital branch beside the campus that will help aid the educational process. Burns said that his education is first and foremost on his list of priorities but he doesn’t want to slight his football career.
“I’m going to dedicate myself to my school work up there and dedicate to playing time and do whatever I have to do to see the field,” said Burns.
“Mainly I just want to graduate, keep my grades up, get my nursing degree. I’m going down there for football but nursing is my main priority.”

INDIANAPOLIS (AP) — Texas A&M defensive end Myles Garrett may have solidified his status as the best player in the... read more