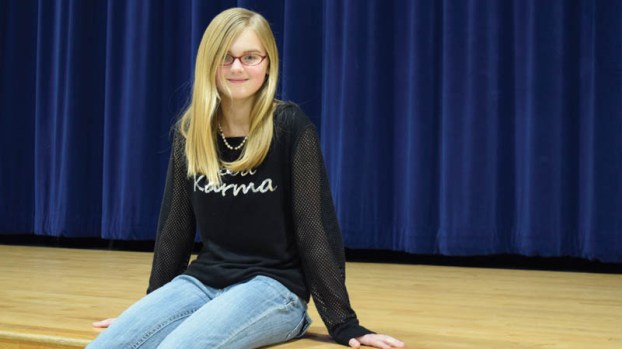 THe Tribune/Heath Harrison Hannah McKenzie, a sixth grader at South Point Middle School, will be one of two students from Lawrence County competing in the regional Scripps National spelling bee in Athens on March 18.

SOUTH POINT — A second Lawrence County speller has qualified for the regional bee in Athens on March 18.

McKenzie was the champion for her school, then came in second in the South Point district bee, becoming one of two students to compete in the county event in December.

As a school champion, McKenzie was eligible to try out for the regional bee by taking an online test.

After the results of the testing were tabulated, it was initially believed that only one student from the county made the cut for the regional bee at Ohio University.

Julie Walters, the student services coordinator for the Lawrence County Educational Services Center, said she called organizers of the regional bee to find out which Lawrence County students had qualified. Due to an oversight, they only provided her with Leonard’s name.

However, South Point faculty had received the results from the testing, which showed McKenzie had also qualified.

McKenzie has competed in spelling bees since the fourth grade, when she qualified for county and placed fourth.

On competing for the first time at the regional, she said she is “nervous, and a little excited.”

“But I’m mostly honored,” she said. It’s an achievement just to make it this far.”

She said her interest in the bee began when she won her school’s event for the first time, when she was enrolled at Burlington Elementary.

“I barely made it,” she said. “But then my teacher and parents said I had a knack for it.”

McKenzie lives in Coal Grove and is the daughter of Shannon McKenzie and Harry Parks.

When she is not spelling, she takes part in Girl Scouts and has hobbies that help her with language mastery.

As preparation for the regional, she said she’s been spending a lot of time “flipping through the dictionary.”

“I’m trying to understand a word’s full meaning,” she said. “And to find the original language of words – in Arabic, they use double consonants, like ‘mattress,’” she said.

McKenzie, who said she is interested in a career in accounting or marine biology, will be eligible to compete in the bee for two more years, until she reaches the limit in eighth grade.

She said she plans to keep at it.

“I’ll do it as long as the state of Ohio lets me,” she said.

Winners of the regional bee will then be eligible to take part in the Scripps national bee, held in Washington, D.C. in late spring.

Some abuse drug meant to be a stop-gap to recovery Suboxone is a drug. It will get you high. Not... read more