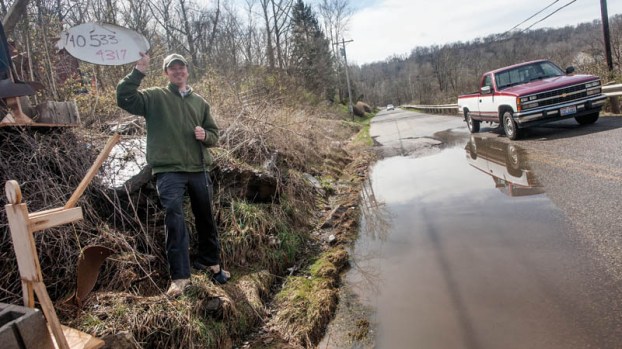 CHESAPEAKE — A Chesapeake area man is taking a unique approach to get people to voice their concerns about conditions of a local road.

Eric Justice has lived in the 900 block of County Road 32, just outside of village limits, since 2001.

About 10 years ago, he said the condition of the road fell into disrepair, with water backing up across one of the lanes, forming what he calls  “a lake” in the roadway.

“When I built my house, it wasn’t like this,” Justice said on Monday of the backup near his home, which still had standing water from last week’s rains.

“If it rains hard, it goes across both lanes,” Justice said, adding that the road, which is used by school buses, is a danger, given that the speed limit is 55 mph.

“Do you know how many people live on this road?” he said. “There’s all of Brentwood, Camelot.”

Justice said he owns 14 rental properties on the road and that the condition is affecting property values.

“It’s a joke. I’m embarrassed to bring professionals here to show them,” he said. “They wonder where I’m taking them.”

Justice said he has been contacting both the county engineer and the county commission for some time, but no action has been taken, other than quick patch jobs.

“They’ve gone by in their trucks and dumped a little out,” he said.

He said he was told the drainage issue began when a previous neighbor has pushed boulders near the ditch draining the roadway.

On Monday, cars were crossing into the other lane to dodge the water in the roadway.

As the problem remains, Justice and a friend have turned the standing water into a display to motivate people to voice their concerns.

They’ve constructed two wooden figures fishing in the standing water from the bank. Dangling from one of the polls is a paper fish, on which is written the office telephone number of County Engineer Patrick Leighty.

“Some of the neighbors got a kick out of it,” Justice said. “Hopefully, people will call.”

Leighty said his office has had people look into the situation, but said putting a new ditch in would cause issues, especially to the property next to Justice’s home.

“There are slips in the whole area,” he said. “We’ve told them, if we put a ditch in, their front yard would end up in the road.”

He said he is aware of the display and received a call on the road on March 2, the first time he has been contacted since November.

Ditching is normal maintenance on the road, and funding is not an issue, Leighty said, but the problem of slips is the main concern.

He said his office is studying the roadway.

“They have called and we have had people look at it,” he said. “The status is that we are looking into it and we are weary of what is going to happen when we do something and are exploring options.”

Vernon Street building is newly renovated The building at 311 Vernon Street in downtown Ironton has been many things, it... read more