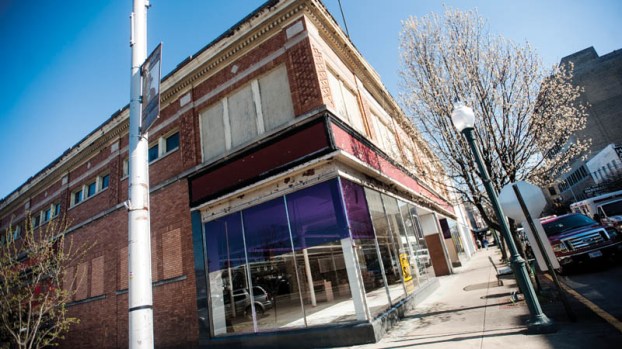 The Kresge Building in Downtown Ironton.

One of city’s largest spaces open

It’s one of the biggest retail spaces available in Ironton, the building on the corner of Third Street. It most recently housed a thrift store. Before that, it was Dollar General but generations of people knew it as the S.S. Kresge Co. Building with its large red letters on the outside of the building and a little restaurant inside.

And it’s a big, big building.

“It’s 11,600 feet” of retail space, explains Michael McDaniel, the Century 21 realtor handling the property for the owners, a corporation that is looking to get out of the real estate business. “You could put two businesses in here, easy.”

The front has two entrances.

“So you could probably divide this space into two retail spaces,” McDaniel said. “Put a partition right down the middle and you have two 5,800 feet spaces.”

And if that isn’t enough space, there is a second floor that is another few thousand feet that is old office space and storage area.

“There is a whole upstairs that goes with it too,” he said. “It has a separate entrance, so maybe you could do apartments up there. That’s pretty neat up there.”

Sam Heighton, executive director of Ironton aLive, said he knew people who lived up there at one time.

The building also has basement space, a new roof, and central heating and air.

The building was probably built in the early 1900s and was made sturdy. There are firewalls in the upstairs space.

McDaniel said he did a property search on the building and found a platte map from 1921. Heighton thinks that the Kresge company probably built the building. Kresge came to national retail prominence under its more familiar name of Kmart.

“That’s what the K stood for,” Heighton explained.

“This building has good nuts and bolts,” he said. “There is a lot you’d have to come in and re-do but it’s a well-built building. There is a lot of space, a lot you could do with it.”

Heighton thinks the open space would be good for a business that has to keep a lot of stock on hand, like a women’s or men’s clothing shop.

“That’s what we need,” he said. “Someplace in Ironton where we can come in and buy clothing. Maybe have a food counter again. And Ironton could always use another eatery.”

Both Heighton and McDaniel fondly remember when Kresge was open and had the restaurant in it.

“A lot of people came in here to eat lunch,” Heighton said. “It was really popular. Everyone that worked downtown ate there.”

“I worked down the street at JC Penney and came in to eat,” McDaniel said.

“I’d come down here to eat and then walk back to work.”

Ironton firefighters showed up at a special meeting of the Ironton City Council on Thursday night to show their support... read more