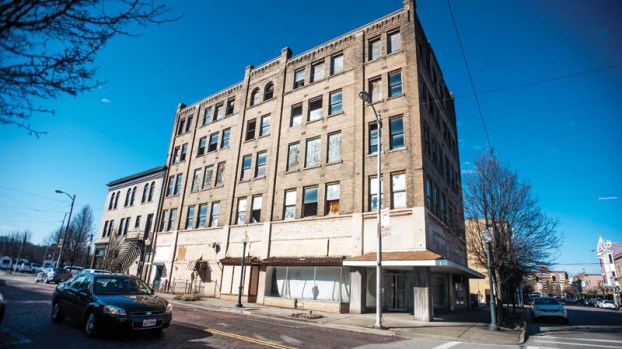 Renovation of the historic Brumberg Building, located in downtown Ironton is dependent on funding from the Appalachian Regional Commission. The government agency, designed to provide development funds for the region, has been targeted for elimination in President Donald Trump’s budget blueprint.

A government agency that has provided funding for five decades for projects in Appalachia and Lawrence County could be eliminated under President Donald Trump’s budget plan.

The White House’s budget blueprint for the 2018 fiscal year calls for the elimination of the Appalachian Regional Commission, which has provided millions in federal funds for economic development in the region.

The ARC operates in 13 states, across 420 counties and, over the past two years, has provided more than $175 million on 662 projects that it says have created or retained more than 23,670 jobs, particularly among the hard-hit areas of West Virginia and Kentucky, which have seen job losses as the coal industry declined.

The agency came about as the result of efforts by President John F. Kennedy, who saw first-hand the poverty and living conditions in Appalachia during his month-long stay in the region for the 1960 West Virginia Democratic primary.

During the presidential campaign, Kennedy met with leaders from the Council of Appalachian Governors, who told him of the need for federal assistance to the area.

Kennedy formed the President’s Appalachian Regional Commission in 1963 with the mission of enacting legislation to bring federal funds to Appalachia.

This legislation passed Congress, following his assassination and, in 1965, the Appalachian Regional Commission was established as a federal agency by his successor President Lyndon B. Johnson.

The ARC’s purpose is to aid economically disadvantaged areas throughout Appalachia. It is composed of the governors of the 13 states comprising the region and federal co-chair, appointed by the president.

The ARC defines its mission by five goals: economic opportunities, increasing the education and job skills of the workforce in the region, investing in critical infrastructure, leveraging the region’s natural and cultural heritage assets and to build the capacity and skills of current and next-generation leaders and organizations for community and economic development.

In Ohio, the ARC provides funding for 32 counties that fall into the Appalachian region, including Lawrence County, where funds have gone to things such as building renovations, construction projects, school equipment and water and sewer improvements.

Dr. Bill Dingus, executive director of the Lawrence County Development Corporation, said the region receives support from both the federal ARC and matching funds from the Ohio ARC.

“It’s a major funder in many programs here,” he said of the federal agency.

Dingus pointed to ARC support in developing the Gateway Center.

“Literally, every building we build there has some ARC funding,” he said.

He also cited ARC funds that were used to purchase equipment for the Electronic Media program at Ohio University Southern.

“Even the Portsmouth Bypass has ARC funding,” he said, noting development in the region is also dependent on Economic Development Administration funding, community block grants and other agencies being reviewed under the president’s budget blueprint.

Dingus remained optimistic that the funding would be restored in a final budget.

“We know how government works,” he said. “It’s a different beast when it gets to the House and Senate. It’s a process.”

Ralph Klein, assistant executive director of building and planning for the Ironton-Lawrence Community Action Partnership, said the ARC is important for the city and county.

“Ironton and Lawrence County get one or two projects by ARC a year, with matching federal funds,” he said. “That’s one of the benefits written into the legislation.”

He said, recently, CAO has sought ARC funds for redevelopment of the historic Brumberg Building in downtown Ironton, for development of the former National Guard Armory at the Gateway Center and for a roundabout project at the Solida Road interchange.

He said ARC, as well as community block grants, have funded street, water and sewer projects, as well as individual business loans.

Klein said, if the ARC and similar agencies are eliminated, the financial burden would then go to local governments who are not equipped to fund such projects.

Like Dingus, he noted that it is early in the budget process, but said his organization would be reaching out to representatives in Washington.

“We’ll be talking to Bill Johnson, Senator Brown — all of those folks,” he said.

U.S. Sen. Sherrod Brown, D-Ohio, has spoken out against the possible funding cuts, stating that they are at odds with Trump’s campaign promises to represent working Ohioans.

“Any Ohio family sitting around the kitchen table knows that making a budget is about choosing priorities, and this blueprint shows that Ohio’s working families are not President Trump’s priority,” Brown said in a statement on Trump’s budget, which would also eliminate the Economic  Development  Administration, which funded $8.2 million in Ohio projects during the fiscal years of 2015 and 2016. “President Trump made bold promises to Ohioans in Ironton and across the state that he’d fight for them — but, instead, he is slashing support for rural communities. He gutted programs that help Appalachian communities invest in job growth, make needed infrastructure updates to road and wastewater systems, and support seniors who need help heating their homes. I will fight for rural Ohio in the appropriations process to restore these critical programs.”

In addition to Democratic opposition to the cuts, Trump faces criticism of on his plan from his own party who represent Appalachia, which has voted increasingly Republican in recent decades.

U.S. Sen. Mitch McConnell, the party’s majority leader who represents Kentucky, said he would fight the proposal to eliminate the agency.

“We are not going to allow any cuts,” McConnell said in an interview with WYMT-TV in Hazard , Kentucky, last week.

In a conference call with reporters on Tuesday, Portman said that the ARC benefits a region of the state that has seen high unemployment.

“I’ve seen these projects,” Portman said. “I know that they work.”

U.S. Rep. Bill Johnson,  R-Ohio, whose district falls heavily in areas covered by the ARC, praised Trump’s budget for spending cuts to domestic programs, but took issue with the proposed cuts to ARC.

“As a member of the House Budget Committee, I’m going to carefully review the budget that the Trump Administration submitted last week,” Johnson said in a statement. “We need to have the important — and overdue — debate about the need and effectiveness of many federal programs. From what I have reviewed so far, there is a lot to like in this proposal.  Cutting funding for the Appalachian Regional Commission (ARC) would not be one of them, however. There is no doubt the ARC is critically important to the people of eastern and southeastern Ohio, and I will do everything I can to protect its funding.”