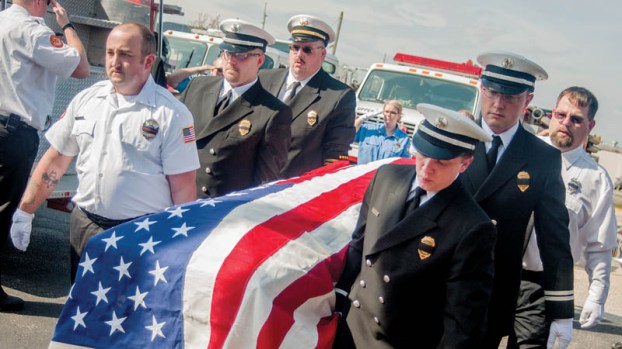 CHESAPEAKE — Friends, family and community members bid farewell on Monday to a man whose life was dedicated to serving his community.

A funeral service was conducted for James “Jim” Newman McCloud at St. Ann Church in Chesapeake, who died Thursday at the age of 93.

McCloud was a founding member of the Rome Volunteer Fire Department, for which he was a member for 55 years.

A veteran of World War II and a Purple Heart recipient, he served as the fire department’s deputy chief, captain, vice president, and treasurer. He was also a founder of the Lawrence County Professional Fire School.

Upon arrival at the church, members of the Rome, Upper Township and Fayette fire departments, Lawrence County EMS workers and others in uniform saluted the casket as it was carried in to the accompaniment of “Amazing Grace” on bagpipes.

Father Charles Moran told the mourners, many of whom were not Catholic, to feel welcome at the service, which was comprised of a holy mass and communion.

Moran said he first met McCloud about 12 years ago, when he received a card in the mail from him upon becoming priest at the church.

He said it took a while to track down McCloud, who had been a past regular of the church, but, at that point, had not attended in some time.

Moran said he finally met him when McCloud was part of a guard at a funeral service and invited him back.

“He never missed after that,” Moran said. “He always participated. I felt like I always needed to find something for him to do.”

Moran recalled things McCloud would do for the congregation, such as bringing everyone potatoes from his garden, or how he collected aluminum cans to raise money.

“It was a delight to know him,” Moran said, stating that McCloud knew the meaning of service.

“To honor creation and give yourselves to others,” Moran said.

McCloud’s daughter, Linda Huffman shared stories of her father, who she described as an “irascible” character known to the community as “Big Jim,” “Jimbo,” “Old Man McCloud” and many other names.

“My father wore many hats,” she said.

She imagined her father upon his arrival in heaven.

“I always said, when Big Jim goes, the whole pearly gates organization is going to get hit with a whirlwind,” she said.

Huffman said Saint Peter would be full of questions about McCloud’s colorful life.

“Like, what were you thinking when you drove that fire engine into the Ohio River…twice?” she said, prompting laughs from the congregation.

She described her father as a man who was always prepared, noting how he left her annotated church bulletins and other notes for “in case something happens to me.”

“Our dad loved being in control,” she said. “He hated surprises.”

Huffman said her father would be more welcome in heaven than the alternative.

“If he had gone to hell, he would organize a volunteer fire department and put the fires of hell out,” she said. “He’d put the devil out of business.”

She said her father would diligently clean the equipment at the fire department and always have it ready for the next run.

“He never expected less than 100 percent from himself,” she said, and said he expected it from others as well.

Huffman said her father, who grew up in the Great Depression, never wasted anything, whether it was saving ketchup and condiment packages for later use or collecting cans for recycling.

“He was into recycling before it was cool,” she said.

Huffman introduced the speakers to eulogize McCloud, one of whom was David Moss, of VFW Post 1064, where McCloud was a member for more than 60 years and served as a post commander.

“Never have I met a man so determined to serve the community,” Moss said of McCloud. “Pops loved to give. I can’t remember how many times I took home tomatoes that I didn’t need.”

Like Huffman, he had plenty of funny stories to share, recalling how McCloud crashed the post’s van, with his legendary driving skills causing some to be afraid to ride with him.

But he ended his remarks by speaking of McCloud’s dedication to his community.

“He taught me that you’re only limited by what you say you’re limited by,” Moss said, tearing up. “His selflessness will never be forgotten and so many people are better today because of him.”

McCloud will buried at Grafton National Cemetery in Grafton, West Virginia on Tuesday.

In addition to Huffman, he is survived by his son, James. He was preceded in death by his wife of 72 years, Mary.

Huffman said a memorial fund will be set up in McCloud’s name to benefit the fire department.