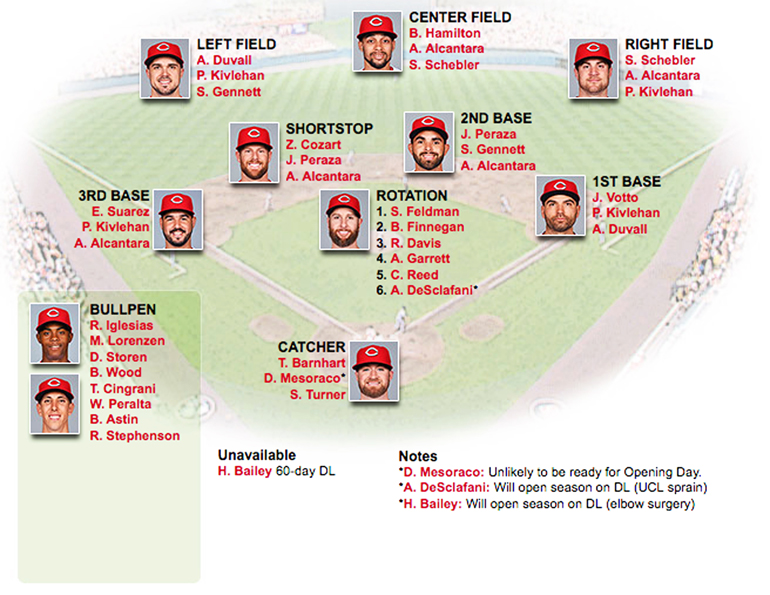 CINCINNATI (AP) — With opening day at hand, Cincinnati Reds manager Bryan Price still had some big holes to fill on his roster.
“We have three undefined starters, two undefined bullpen spots and probably three undefined bench spots,” Price said.
But in the Reds’ realm, that marks progress.
“We have less ambiguity on the roster,” Price said.
The Reds are further along than a year ago, when they opened the season with five injured starters and an untested bullpen. They never fully recovered from the pitching staff’s implosion in the first half, finishing last in the NL Central while losing 94 games in the second year of their rebuilding.
Their biggest offseason acquisition was closer Drew Storen to anchor their historically bad bullpen, giving him a one-year, $3 million deal. They signed Scott Feldman to help fill out the rotation, and he wound up with the opening day start when injuries struck again. If the Reds’ starting pitching can hold its own, they’re expecting to take a step forward overall.
When they got their injured starters back in the second half last season, they finished 36-37. If the rotation can hold its own while Anthony DeSclafani and Homer Bailey recover from their latest injuries, the Reds should be much more competitive.
“We have a chance to be way better than people are expecting,” shortstop Zack Cozart said.
Some things to watch as the season unfolds:
ROOKIE WATCH: The Reds traded veteran second baseman Brandon Phillips to Atlanta — and agreed to pay most of his salary — to open a spot for 22-year-old Jose Peraza to play regularly. He was their most impressive rookie last season, batting .324 in 72 games with three homers and 25 RBIs. His development will be worth watching.
SORE ARMS: DeSclafani misses the opening day start for the second straight year, this time with a sore elbow. Bailey had surgery to remove elbow spurs and isn’t expected back until June. The Reds were counting on them to anchor the front of the rotation. Their rehabilitation will be the main off-field focus in the first two months.
BULLPEN 2.0: If Storen can fill the closer role, it’ll bring stability to a bullpen that allowed a major league record 103 homers last season and managed only 28 saves in 53 chances. The Reds chose to open last season without a proven closer and it was a major factor in their early implosion.
MESORACO’S RETURN: Catcher Devin Mesoraco had hip surgery for the second time last year, resulting in another lost season. He was an All-Star in 2014, when he put up the best numbers by a Reds catcher since Johnny Bench — 25 homers, 80 RBIs. Shoulder and hip operations have essentially wiped out his last two seasons. The Reds went slowly with him during spring training and are hoping to be able to use him in a limited role during the season.
ONE TRADE LEFT? After trading away the core of the team over the last two years, the Reds have one move to make during the season. Cozart is 31 years old and a year removed from reconstructive knee surgery. The Reds were willing to trade him in the offseason, but there wasn’t much interest. If he shows that his right knee is fully recovered and he’s able to play every day again, he could be dealt at midseason, essentially completing the roster overhaul.

Matchups may be key to winning NCAA title