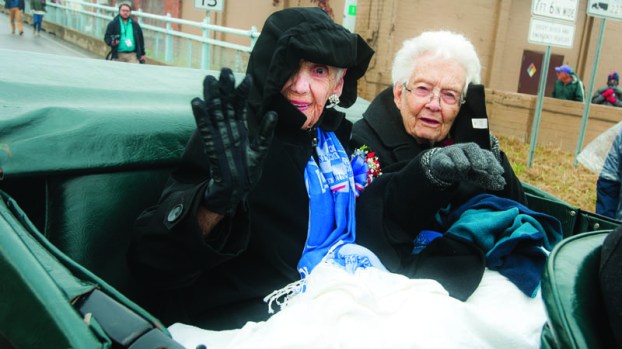 Della Burton, left, and Verna Sloan, right, are seen exiting the old Ironton Russell Bridge during Bridge Day in November 2016. Burton passed away on Thursday at the age of 101.

Della Burton of Russell dies at age of 101

RUSSELL — One of two centenarians who played a key role in the opening ceremony of the new Oakley C. Collins Memorial Bridge connecting Ironton and Russell has died.

Hank Bond, the co-publisher and editor of the Greenup Beacon, who reported Burton’s death, spoke of her personality.

“Della was a woman of faith and family,” he said. “She was a standard of humility and a wonderful person. The many of us that knew her are better because she was in our lives.”

She attended the festivities on Nov. 23, 2016, in downtown Ironton, when the new span replaced the 94-year-old Ironton-Russell Bridge, which closed that day.

After the new bridge opened, a parade of antique cars went across the span to Russell, then crossed back to Ironton.

Once the two were taken across, a gate was put up, closing the old bridge, which they had both outlived.

Burton and Sloan also were among those who cut the ribbon on the new span.

At the ceremony, Burton told The Tribune that she could remember a time before the old bridge was built in 1922, when, as a child, she and her mother would have to take a ferry to Ironton to shop for clothes.

Burton, who was a regular attendee of the Russell Senior Center, was a member of Mead Memorial Church and the Russell Civic League. She was preceded in death by her husband, Edmond Burton.

Funeral services for Burton are set for 1 p.m. today at Carman Funeral Home in Flatwoods. Burial will follow at Bellefonte Memorial Gardens in Russell.

The legal system and recovery

A different approach may help the addicted recover There is a stereotypical dichotomy in many of our minds when it... read more