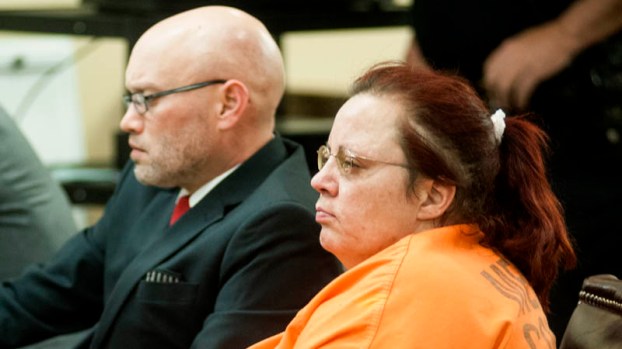 Tina Campbell-Adkins appears in front of Judge Donald Capper in Lawrence County Municipal Court during a pre-trial hearing. She is accused of the murder of her husband David Adkins.

Tina Campbell-Adkins, who was arrested last week in the death of her husband David Adkins, had her probable cause hearing Friday morning in Judge Donald Capper’s courtroom.

Capper found there was sufficient evidence to proceed to grand jury after hearing testimony from detective, Sgt. Aaron Bollinger, with the Lawrence County Sheriff’s Department.

Bollinger explained that the investigation began on Thursday, March 30, after he spoke to chief Randy Lewis with the Chesapeake Police Department. Lewis’ office had spoken to the family of David Adkins, who indicated they hadn’t seen or spoken to him since the previous Sunday.

Bollinger explained that Chief Lewis and Deputy John Chapman spoke with Tina Campbell-Adkins at that time, and she indicated she hadn’t seen David Adkins since Sunday either.

Bollinger told Anderson that Lewis and Chapman went through the house at that time, and in the basement encountered a strong smell of bleach and a room with a padlock on the door.

When they asked Campbell-Adkins about the room and the smell, he said, she became agitated and asked them to leave.

Bollinger came back himself with another officer later that day, but there was no answer. He said he made arrangements with Lewis at that time to obtain a copy of the missing persons report filed by Adkins’ family.

He said he also noted at that time there was a Ford F-150 and another vehicle, a small four door automobile that he believed may have been a Chevy Cobalt, parked behind that.

Bollinger said it was then around 2 a.m. on Friday, March 31, when he received a call from Deputy Bradley Layman. Layman told Bollinger that Chad Carter, the boyfriend of Adkins’ stepdaughter Patricia Adams, had contacted him just after midnight requesting a well-being check on Adkins.

Carter told police he had received a call from Adams asking for help moving a refrigerator. When Carter asked about the refrigerator to be moved, Patricia Adams broke down, he said, and told him that David was in the refrigerator.

Carter told Adams that he “wanted no part” in the activity, and then contacted the police.

Bollinger said they obtained a warrant based on this information, which they served at around 7 a.m. last Friday morning. Tina Campbell-Adkins was detained at that time as well, Bollinger said.

He explained that BCI was already on the scene because they felt forensics would be needed given the strong smell of bleach detected earlier.

He said Tina was “unpleasant” as she was taken into custody, but never asked what she was being detained for.

He said he and a photographer with BCI immediately went into the basement to document the scene before cutting the lock, just in case Adkins was still alive inside the padlocked room.

After cutting the lock, Bollinger said, they opened the door and saw a large, black, stand-up refrigerator with a chain and padlock wrapped around it. He said he then cut the lock on the refrigerator and they opened it to reveal what appeared to be a body wrapped in plastic sheeting, the roll of which still stood nearby propped in a box next to the refrigerator.

He said that while Agent Henshaw with BCI collected photos, they removed a portion of the plastic sheeting to reveal a foot, covered with significant amounts of blood.

The full body was not removed from the plastic at that time, to preserve any evidence that might have been inside, Bollinger explained. He was present for the autopsy in Montgomery County, though.

Bollinger told Anderson that he had conducted an interview with Tina Campbell-Adkins and she admitted to the stabbing, but her story did not match the details that the forensic investigation would eventually provide.

Bollinger first asked Campbell-Adkins if either Patricia Adams or Chad Carter was involved in the murder, and she told him no.

She explained to Bollinger that everything began on the previous Sunday, March 26, when the family had gotten into an argument. It was mainly, she said, between Patricia Adams and David Adkins over a plate that had been broken. She said that Chad Carter had gotten involved, defending his girlfriend, and that Adkins made him leave the home. Carter slept in his vehicle nearby that evening.

Campbell-Adkins told Bollinger that Patricia eventually went to bed in her and David’s bedroom, but that this made David angry. She said David told her “he was going to get” Patricia, and said he went toward Patricia’s and Chad’s room. Bollinger did not explain why Campbell-Adkins said David was going toward Patricia’s room, but he said this was when she stabbed him, on the landing to the basement. She told Bollinger she stabbed him in the neck, and he went down, and she then stabbed him again.

She told Bollinger that Adams was unaware of any of this transpiring, and that she rolled him in plastic and placed him in the refrigerator by herself.

When he asked about how that was possible, she told him, “when the adrenaline is pumping, you can do anything.”

Bollinger said Tina was arrested at that time, and they went to a Red Roof Inn in Barboursville to interview her daughter, Patricia Adams. Adams told him she had not been in Adkins’ bedroom when the incident started, as her mother had stated. After talking with Adams, Bollinger said he then confirmed with BCI that the incident had actually started upstairs and then went through the house to the basement.

Bollinger said the autopsy performed by Dr. Upgrove, a pathologist with BCI, showed that the cause of death was two stab wounds to the heart. He said there was also one stab wound to the liver, numerous to the neck and face, and 17 in the back. In all, Bollinger said, Adkins was stabbed a total of 35 times.

“There was almost no blood in his body at the time of the autopsy,” Bollinger said.

Attorney Michael Davenport, with the defense team, asked Bollinger how long he interviewed Campbell-Adkins. Bollinger indicated they talked about an hour, and that all aspects of the conversation, including reading Campbell-Adkins her Miranda Rights, was done on film.

Davenport asked if Campbell-Adkins indicated that Adkins had made a threat to her daughter. Bollinger said she indicated that he had been verbally abusive on the evening of March 26, but not physically violent.

Davenport asked about past incidents of domestic violence and Bollinger said she had indicated one incident in 2015 and an incident of Adkins slapping her around Christmas of 2016.

Davenport asked Bollinger if he had looked into Adkins’ criminal history, and Bollinger said he had, and had seen some robberies listed there.

Prosecutor Brigham Anderson objected to the line of questioning, calling it irrelevant.

However, Capper said he would allow the defense some leeway to continue, though he himself questioned the relevance of Adkins’ criminal past at this point in the trial.

Davenport continued to question Bollinger about what he called Adkins’ “violent and criminal history,” and asked Bollinger if he would agree that Adkins’ saying he was “going to get Tish (Patricia Adams)” was a threat she should have taken seriously.

Bollinger said Adams indicated to him that while Adkins’ would “verbally put her down” she didn’t indicate that he was ever physically violent.

Davenport asked if Bollinger had been in Campbell-Adkins’ place, would he have taken the threats seriously knowing he had “shot up his mother-in-law’s home,” referencing one of the alleged crimes perpetrated by the late Adkins.

Bollinger, however, noted that by Campbell-Adkins’ own statement, Adkin’s did not have any weapons and was dressed in only underwear and shorts at the time.

Capper found that there was probable cause to bind the case over to grand jury, and said that bond would remain at $1,000,000 cash or surety.

Davenport indicated after the hearing that David Adkins had multiple past arrests, including a charge for wanton endangerment with a firearm that was dropped after it was determined that the implement in question was not actually a firearm, an arson case from juvenile court when he was still a minor, and six domestic violence petitions in the state of West Virginia.

However, family of David Adkins present in the courtroom said that not only was that information irrelevant, but that Tina Campbell-Adkins has her own history of violent criminal offenses.