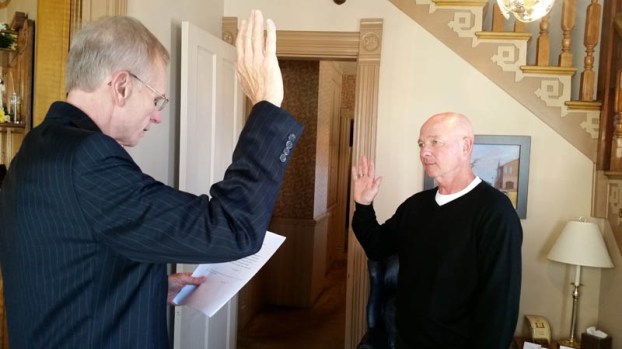 Attorney Mack Anderson swears in Jim Tordiff as a member of the Ironton City Council on Monday morning. Tordiff was chosen by council to fill the unexpired term of Councilman Dave Frazer, who passed away in March.

In a simple ceremony, Jim Tordiff became a member of the Ironton City Council for the fourth time.

He was sworn in Monday morning at the office of council’s legal counsel Mack Anderson and witnessed by Vice Mayor Craig Harvey and Finance Director John Elam.

Tordiff will be filling in the remaining seven months term of Dave Frazer, who passed away on March 17. City Council had 11 people apply to fill the seat and Tordiff was chosen because of his previous experience as a councilman, mayor and city finance director.

“I was first elected to council in 1987. Then I was mayor from 1990 to 1995,” Tordiff said. “Then I was on council two more times during my tenure at Dawson-Bryant schools. So I think this is the fourth time.”

He has been at Dawson-Bryant for the past 22 years.

“I have always had a soft spot for Ironton,” Tordiff said. “I’m from Ironton and I worked at the city for so many years, it’s in my blood. I feel that I have as good a working knowledge of how the municipalities work as anyone. And I have always had a passion for the work.”

He said he has a lot of respect for those involved in the city right now.

“You look at it, we now have four ex-mayors involved, that’s unique,” Tordiff said. Besides Tordiff, former mayors Bob Cleary and Rich Blankenship are on city council and former mayor Elam is the finance director. “That’s a good group to work with because you aren’t bringing everyone up to speed, everybody knows how things work. And you can sit down and have some really good conversations about what needs to be done.”

He said he doesn’t know Mayor Katrina Keith well but looks forward to working with her.

Tordiff said his strength is in finance since that has been the field he has worked in for decades.

“John (Elam) and I have already sat down and talked,” Tordiff said. “I think this is a really good situation to be a team and have everyone working together.”

He said after the term expires, he would run for the seat in the November election.

“At this point and time, I have every intention of running again,” Tordiff said.

Vice Mayor Harvey said he has known Tordiff for years and he was actually one of the people he consulted when he was deciding to run for council.

“I have always respected Jim and his opinions,” Harvey said. “I’m glad to see Jim here as part of council. Very, very excited.”

Faith and the fallen

Churches help addicted on the road to recovery Churches have been cornerstones of the recovery process for decades. From Alcoholics... read more