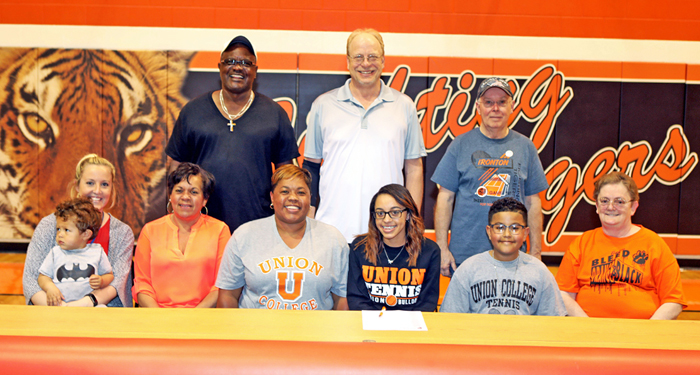 Tennis has always been a part of Aleigha Justice’s life. It looks like it’s going to play an even bigger past for the next four years.
The Ironton Lady Fighting Tigers’ senior tennis standout got a chance to continue her career after signing a letter-of-intent with the Union College Bulldogs on Wednesday.
“I’ve very excited. I’m a little nervous. I’ve always wanted to do this. It’s like a dream come true,” said Justice.
“We went and visited and the coach told me that I did have a spot on the team and I would be a great contributor to the team. I’m very excited about that.”
Ironton coach Ron Ross turned Justice onto Union College and the program.
“Mr. Ross told me about it. One of his family members goes to Union,” said Justice.
Speaking of family, Justice comes from a tennis family. Her uncle Glen Medcalf has been a coach, her cousin Lovell Medcalf was a standout at Ironton and played for Morehead State, and her younger brother Payton, 10, is following the tennis tradition.
“”(Payton) is starting to get into it and it’s good teaching him and showing him the ropes and how everything goes,” said Justice.
“I just want to get my degree and start my life. Being three and a half hours away from my family is going to be tough at first, but I’m really ecited for this new adventure.”
Ross said Justice has been the keystone of the program for the past four years.
“Aleigha has been the rock of our program ever since she started as a freshman. She took a lot of lumps that first year as a freshman. Obviously she is diminutive in size, but she works as hard as she can like a Fighting Tiger should. She goes 100 percent every match and it paid off,” said Ross.
Justice lost just one regular season match in each her junior and senior seasons and came within one win of advancing to the state tournament.
“Overall from my freshman year not winning a single match and my senior year only losing one, I’m very proud of myself. I’ve seen improvement in myself.”
While high school had its tough matches, Justice is very much aware of how much better talent she will face at the college level.
“It’s very different, but it’s not going to change how I play. I’ve always loved the game. I’m just going to go out and do the best I can do and make my family proud,” she said.
Justice plans to major is Psychology.
“I’m really going for an education. Tennis is just a plus,” said Justice.

Jim Walker jim.walker@irontontribune.com COAL GROVE — It was a big game, so the Coal Grove Hornets turned to their senior... read more