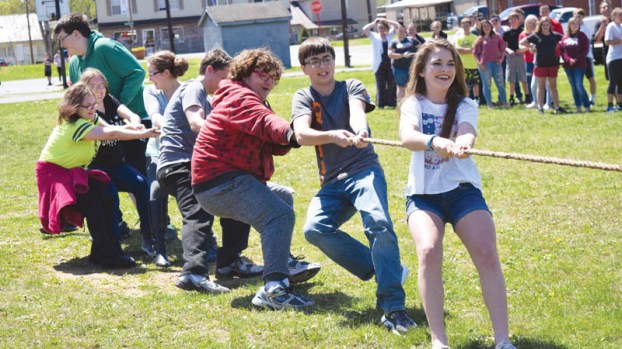 Dawson-Bryant eighth graders compete in a game of tug of war as part of a celebration of the end of academic testing season on Wednesday.

COAL GROVE — Dawson-Bryant Middle School students and faculty enjoyed a sunny day on Wednesday, as they took part in a schoolwide event on the grounds of the old board of education office.

To mark the occasion, the school brought in inflatables, where students donned head gear and battled it out, while other games were set up.

Each grade took part in tug of war competitions, followed by a battle of the genders.

As the boys dug in and gave the rope a tug, the girls, as a gag, let go of the rope in unison, causing them to fall. Then, they faced off for real.

At a nearby table, students raced to find a piece of bubblegum buried in a pan of flour, without using their hands, then tried to blow a bubble before the others.

Others played games of basketball, while some took the time to relax or enjoy the Sno-Cones being served.

Roach said the school had originally planned to use Paul Porter Park for the event, but moved to the board grounds due to the rain of the past few days.

He said the event was needed, after the hard work of the annual academic testing.

“The teachers needed a break, and the students needed to get out and unwind,” he said.