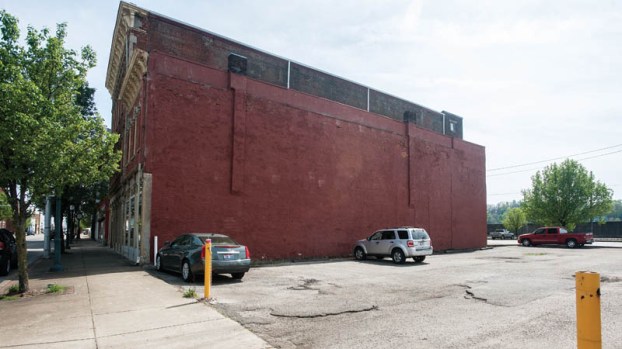 Empty lot located next to Central Hardware in Ironton.

One of Ironton’s oldest businesses got a little bit bigger, at least land-wise.

On Thursday, the owners of Central Hardware and Furniture closed on a deal to buy the parking lot adjacent to their building on Second Street.

“We just closed on it today (Thursday),” said Rich Donahue. “We are going to open it up for customer parking really soon. We can probably park 30 cars there.”

He said that a lot of the older customers park in the alley.

“But this will help if there is no parking on the street or in the alley,” he said.

Central Hardware is one of the oldest businesses in Ironton, it opened for business in 1926. The building was constructed in 1871 and survived the 1937 flood that covered much of downtown Ironton.

Roy Ratliff, who turned 91 this year, has been in the hardware business for 67 years.

“I came here with my father in 1950. I had a store in Portsmouth back in the ‘50s, I came back here because it was a better business area and I’ve been here ever since,” he said. “We’ve got an old business here. It was incorporated in 1909.”

The building has remained essentially the same for 70 years. It still sells nails by the pound and still uses a certified scale that is made of solid steel decades ago.

“Roy has really taken care of this building, unlike a lot of other ones here in town,” Donahue said. “He is passionate about his business and he has a lot of pride here.”

“We’ve remodeled down here over the years, we took some brick walls out,” Ratliff said. “After I’ve been here all these years, I’ve become very attached to this building and I wanted someone to come who would take over and continue to keep the building as it is, because it is an antique.”

That’s why Rich Donahue bought into the business last April.

“I’m very thankful he liked the building and wanted to have a part in it,” Ratliff said. “It’s been a good partnership. He has a lot of ideas of what to do with this business.”

A recent change has been moving some of their furniture from the second floor to front and center of the first floor.

Donahue said that they talked about doing that one day and he had the plans out.

“We got blue tape and marked it off, I came in a week later to visit with him and he had the store half torn apart,” Donahue said.

Besides moving goods around, they are always looking for new merchandise like new types of plumbing pipes.

“But yet we still have the bins of galvanized nails and things like that,” Donahue said. “We’ve got the whole gamut. We’re moving back 12 feet at a time. It’s just going to take time to restock.”

Ratliff said that it was different when he came into the business after World War II. People, from both the city and the county, often came to buy furniture as well as hardware. But younger generations didn’t realize they sold furniture, the furniture was expanded from the second floor to the first floor so people could see it through the windows.

“And we’ve gone onto Facebook to let the younger generation know,” Ratliff said.

“We’re going next week to make our fall purchases,” he said. “It’s the largest furniture market in the world. We try to keep up with modern times.”

EMTs serve as ‘triage’ so recovery can begin

Overdoses are something the Lawrence County EMS sees on a fairly regular basis. “We average one or two (overdoses) a... read more