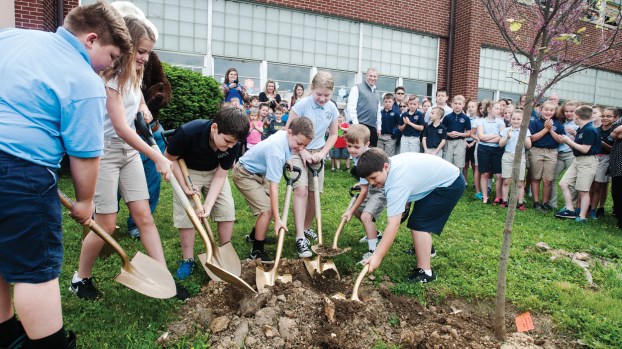 THE TRIBUNE/JESSICA ST JAMES Students from St. Lawrence School plant a tree in honor of Arbor Day on Thursday.

Students at St. Lawrence School in Ironton got a head start on the Arbor Day holiday on Thursday with an event for the community.

Seven students, one from each classroom, with golden shovels, flanked by Smokey the Bear from the U.S. Forest Service, led a tree planting activity on the grounds of the school.

Father David Huffman, the priest for Ironton’s Catholic Community, said the school recently removed several old trees, with the help of an anonymous donor, who paid to cut them down and remove the stumps.

“The old trees needed to come down,” he said. “They were damaged and ready to uproot the sidewalk. And they were a danger to people.”

Following their removal, he said the schools met with leaders from Ironton in Bloom.

“They came to us and wanted to make it into a community project,” he said.

In total, 21 new trees were donated to the school, provided by Ironton In Bloom, groups and businesses such as Ironton aLive, Our Lady of Bellefonte Hospital,  ALTIVIA and Holiday Inn Express.

Other were donated by individuals, in memory of others.

Huffman said each tree carries an identifying tag, which will eventually be replaced with an informational plaque.

“People can see and say, ‘Oh, gee. This is a Cleveland Pear. I think one of those would look good at home,’” he said.

She said they focused on trees that require low effort to maintain, and that most were selected for the type of leaves.

She said the school’s back yard would feature several linden trees.

“They provide shade, but they have little, fine leaves that blow away easily,” she said.

“Not only did we want the children to understand what Arbor Day is all about, we wanted to give people a chance to see trees planted and the examples of the types of trees they can plant that are easy to maintain,” she said.

New ownership kept Coal Grove shop from closing When Indulgence Tanning Salon announced they were going out of business at... read more