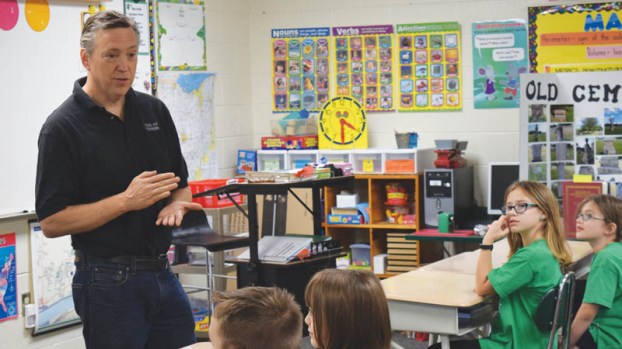 ROME TOWNSHIP — Third grade students in Kim Carrico’s class at Fairland West Elementary have been studying local history and, on Friday, a special guest dropped by to talk with them.

Jim Thornton has been the announcer for syndicated game show “Wheel of Fortune” since 2011, taking over from original announcer Charlie O’Donnell, who died in 2010.

A native of Huntington, Thornton, 52, attended Cammack Elementary as a child, graduated from Huntington High in 1983 and earned a degree in linguistics from Marshall University.

“It’s been six great years,” Thornton said of his time with the show, which followed a stint as fill-in announcer on “The Price is Right.”

Thornton is the current owner of the home of Jacob Proctor, the founder of the village of Proctorville. Originally known as Quaker Bottom, it was named in his honor in 1878. “It was built a long time ago, in 1834, for Mr. Proctor,” Thornton said. “The U.S. was very new west of the Ohio River at the time.”

Thornton said, prior to his owning it, the Proctor home belonged to his grandfather several decades ago.

“Our house looks like an old colonial house and all the windows face the river,” he said, noting that the Ohio was the main route of transportation and that Proctor served as postmaster at the time.

Thornton, who lives in California, but maintains the home in Proctorville, said he is presently in the process of restoring the home to its original, 1834 state, working with crews to redo the plaster and restore the windows with glass from another home of the era.

Despite it’s age, Thornton said the home stays warm in the winter and cool in the summer, and only recently had air conditioning installed.

“It has thick walls,” he said and noted the shade trees around it.

Thornton offered to give the students a tour of the home at some point in the future, as a school field trip, to which his offer was greeted with enthusiasm.

The children have been studying the history of both Proctorville and Rome Township for the past few weeks, including Proctor’s life.

She said for the subject, the students were asked create a timeline of local history events.

Molly Dunlap, a student in the class, shared what she had been studying.

“We learned about the Rome Beauty Apple,” she said. “It was founded by Allanson Gillette. We also learned there was a big fire in 1900 that damaged many businesses. And there was a bad flood in 1937.”

Another student, Tim Webb, said he learned that Proctor was the postmaster of the region.

“He lived in the house on Susan Street and he’s buried at the old Rome-Proctorville cemetery,” he said.

Carrico said the students were very excited for Thornton’s visit.

“They’ve anxiously awaited this day all week,” she said.

In addition to discussing Proctor, Thornton also talked about his time hosting “Wheel.”

He also discussed how quickly times change, asking the students if they had ever seen a flip phone or a rotary dial phone.

Finally, after he explained how a rotary, works, one student chimed in.

“My grandmother has one of those!” he said.

As far as local history, Thornton was impressed with how much the students knew about the subject and the depth of questions he was asked.

“It’s great that you guys are taking an interest in this,” he said. “Because, when you’re grandparents, you’ll be able to talk about it and keep it alive. History is where we come from.”