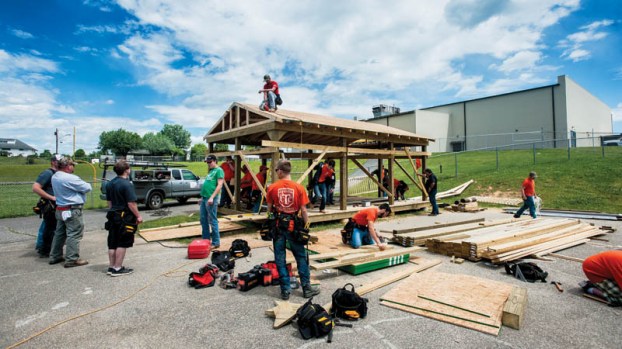 SOUTH POINT — For the past week, students at South Point Elementary have been watching a crew assemble a new reading pavilion on the grounds of the school.

Administrative assistant Bill Christian said the school applied to Lowe’s for a grant for the $15,000 project, as part of the Toolbox for Education program.

“We had to kick in some,” Christian said, stating that the structure will have multiple uses.

As of now, he said students have had to sit under the picnic tables behind the school to find shade while reading outdoors on recess.

“It can also be used as an outdoor classroom and a gathering spot,” Christian said.

He said it will also serve as a nurse’s station during the school’s annual field day event with Burlington Elementary. Until now, the schools had to set up tents on the spot each year.

Christian said when he was at Lowe’s, they put him in touch with Drew Gibson, of Superior Handyman and Remodeling, a local contractor and graduate of South Point High, who volunteered his time and expertise for the project.

“I used to teach at the high school, and it turned out, I had him in class,” Christian said.

He said, in addition to helming the job, he said that Gibson helped in picking out materials and with improving the design.

“He ended up saving us a lot of money,” Christian said.

He said that Gibson brought in a friend for the project, Matt Parnell, an instructor with Collins Career Technical Center, who, in turn, brought about 30 students from the carpentry and building maintenance courses to assist in the construction.

“It’s part of our curriculum at Collins,” Parnell said. “It helps us to meet state standards and it helps the community and other schools.”

Christian said the structure will be large enough to hold two full-size picnic tables and will also include handicapped-accessible ramps and an L-shaped bench in the corner.

He said that a local Girl Scout troop has supplied a “buddy bench” for the project as well.

“If a student feels alone and that no one is playing with them at recess, they can sit there and someone will come to them,” he said.

Christian said construction on the project will likely be finished by Friday, then Shield Roofing of South Point will provide a metal roof for the pavilion. He said Lowe’s provided free delivery of all materials.

“It’s been a good community project,” he said. “Never did I dream we would have students from the vocational school helping. It’s made things faster.”

One of the school’s kindergarten classes has a window overlooking the site and he said the students have been watching the crews work all week.

“They’ve been very excited,” he said.

Christian said, once the pavilion is completed, a dedication ceremony will take place at the school before the end of the year.

“We’re going to have all the kids out here, and we hope the students from Collins will come back for it,” he said.