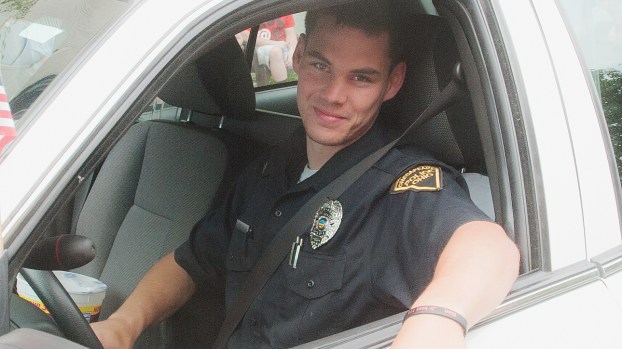 Jessica St. James/The Tribune Chesapeake police offier Aaron Christian, who died in October 2016 from injuries received in a cruiser crash, was inducted into the Ohio Peace Officers Memorial on Thursday.

LONDON — Chesapeake police officer Aaron Christian, who died from injures received in a crash in his cruiser last fall, was inducted into the Ohio Peace Officers Memorial on Thursday.

Christian, an Ironton resident, who previously served on Coal Grove’s police force, was one of six officers honored who died in the line of duty in 2016.
Jill Del Greco, a public information officer for Ohio Attorney General Mike DeWine, said that the ceremony was attended by DeWine, family and friends of the officers, as well as members of law enforcement. It was open to the public.

“It’s a beautiful ceremony,” she said.

Christian was represented by family members, as well as Chesapeake Mayor Tommy Templeton. A Chesapeake police cruiser was part of the procession leading to the ceremony.

Del Greco said, prior to the service, DeWine met with the family members in private.

She said the event was filmed and will eventually be made available online on the Ohio Channel.

The memorial is on the grounds of the Ohio Peace officers Training Academy in London.

Christian will also be honored at a federal memorial in Washington, D.C. at a future date.

Christian, who was 24, was a graduate of the Collins Career Center Police Academy and joined the Chesapeake police force in 2015. During his time on the force, he worked security at the Lawrence County Fair and, at one point, was the village’s sole officer.

Christian crashed in his cruiser on State Route 7 on Sept. 18, 2016, and died of his injuries at Cabell Huntington Hospital on Oct. 18. He is buried at Woodland Cemetery in Ironton.

Duets album with Willie Nelson, Leon Russell planned for fall release NASHVILLE — After more than 50 years in the... read more